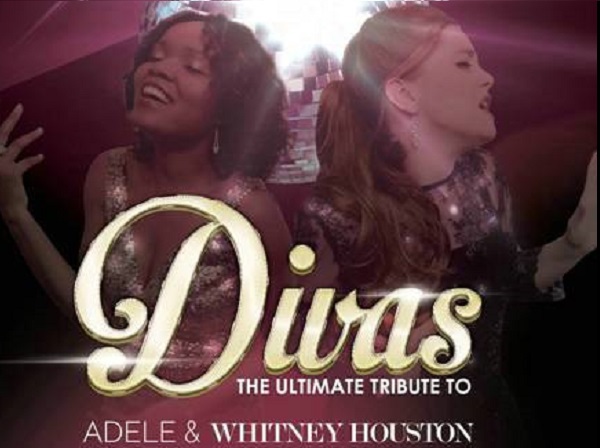 About DIVAS - The Ultimate Tribute to Adele & Whitney Houston

“DIVAS” is a fantastic journey throughout the years of the outstanding multi award and Grammy winning “ADELE” and “WHITNEY HOUSTON”. Featuring the greatest hits of these two performing giants of the music industry.

The show is performed by “AWARD WINNING” Artistes “ OLIVIA LEIGH” and “NYA KING”. Both awarded the 2013/2014 “NTA” National Tribute Awards accolade for best UK and International “ADELE” and “WHITNEY HOUSTON” Tribute. Featuring massive Hits such as SKYFALL, I WANNA DANCE WITH SOMEBODY, ROLLING IN THE DEEP, MILLION DOLLAR BILL, SOMEONE LIKE YOU, IT’S NOT RIGHT BUT IT’S OK, RUMOUR HAS IT, GREATEST LOVE OF ALL, CHASING PAVEMENTS, I HAVE NOTHING, MAKE YOU FEEL MY LOVE, I WILL ALWAYS LOVE YOU, SET FIRE TO THE RAIN and many more. The huge hits of the Grammy award winning stars guarantee an outstanding show.

“Olivia” and “Nya” have a collective twenty years of professional performing experience and have performed extensively throughout the UK, and Internationally, Including; India, Egypt, Turkey, Istanbul, Germany, Crete, Switzerland, Tenerife, and Rhodes. Whilst the Artistes have also performed extensively in venues across the UK inclusive of live production shows, they have also performed privately for state senators plus a tour with the world famous “HEATWAVE” of (Boogie Nights fame).

“DIVAS” is available with or without Live Band, to suit all events and clientele.

The show is available on playback with backing tracks or with live band - please call for live band prices.

Price guide is based on the playback show...