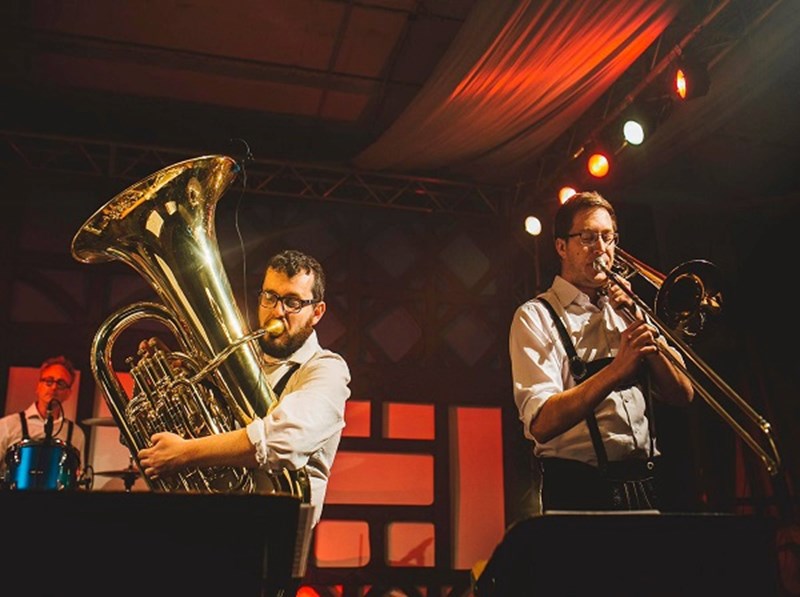 Oompah band The Bavarian Strollers have been established since the late 70s; bringing their unique take on Um Pah music to audiences all over the world...

The Bavarian Strollers have travelled the world bringing their unique take on Um Pah music to anybody that will listen! They specialise in Bier Keller evenings and Um Pop nights although they can cater a performance to just about any need; they've done everything from strolling round offices while people work to dancing on top of a mountain in silly wigs!

When performing for a Bier Keller night, the Bavarian Strollers can get an entire audience singing, clapping and dancing. They lead a series of Bavarian table dances (they’re VERY different from English table dances) and perform lots of German toasts or ‘Prosits’. The band bring their own PA system, costumes and even provide Bavarian music to play in the breaks. They can also turn up and stroll around a venue playing, which works well to start an evening off and introduce the band to the audience.

The Bavarian Strollers also perform at pub nights where the band play pop music in an Um Pah style. Its very fun, very new and its called 'Um Pop'! The Bavarian Strollers have been doing this for a few years and find it goes down a storm! If you want something different for your event or are organising a German themed party then this is for you.

As a band, they have worked since 1978 and have had some of the country's top professional musicians play with them. The Bavarian Strollers use various line ups of players, the standard being Clarinet, Trumpet, Trombone and Tuba but they can add Accordion and Drums to change the sound and atmosphere if preferred...

The Bavarian Strollers perform either 3 x 30 mins or 2 x 45 mins as standard.

The band can be expanded from their standard 4-piece to 5 and 6 piece options with added extra accordion, extra brass or live drums.

"It was great! It went well and they were received well. Huge thanks to them!" - Lesley Hodgson, Merthyr Tydfil Global Village.