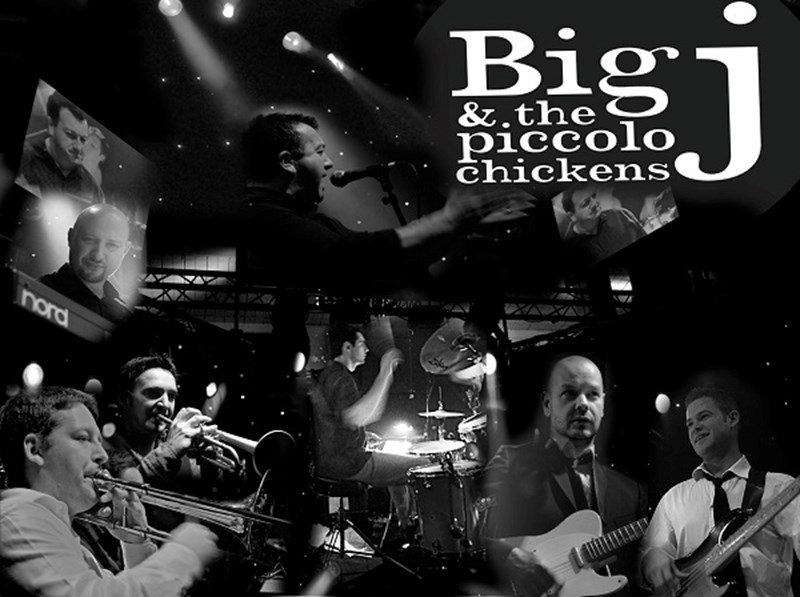 BIG J AND THE PICCOLO CHICKENS continue to gain acclaim as one of the best soul/disco/party bands in the business. Led in his own inimitable style by BIG J himself, the band plays a well polished, hard-hitting mix of soul, funk and disco anthems from artistes such as James Brown, Otis Redding, Rose Royce, Kool and The Gang, The Jackson 5 and Stevie Wonder.

Big J & The Piccolo Chickens live show has been described by many as one of the best there is, combining excellent music, dance and just a subtle hint of lunacy(!)

This unique style has resulted in support slots with Edwin Starr and The James Taylor Quartet.  They have gigged at Ronnie Scotts, a record 7 consecutive years at the Guinness Jazz Festival in Cork, five tours of some of the most reputable venues in Ireland as well as many gigs on the corporate and university/college circuits - their reputation is rapidly expanding. Whatever the event, there’s one thing guaranteed… If it’s BIG J it’s PARTY TIME!!!

I WANT U BACK
EVERYBODY NEEDS SOMEBODY
GET DOWN ONxxx IT
LADIES NIGHT
I WISH
SUPERSTITION
SEX MACHINE
GET UP OFFA THAT THANG
HOT, HOT, HOT.
BINGO BANG
HIGHER AND HIGHER
RUNAWAY BABY
DO A LITTLE DANCE
BOOGIE NIGHTS
CAR WASH
A MESSAGE TO RUDY
I SHOT THE SHERIFF
GET LUCKY
WHITE LINES/GHOSTBUSTERS
SOULMAN
PLAY THAT FUNKY MUSIC
UPTOWN FUNK
BLAME IT ON THE BOOGIE
DECEMBER 63
ROCKS OFF