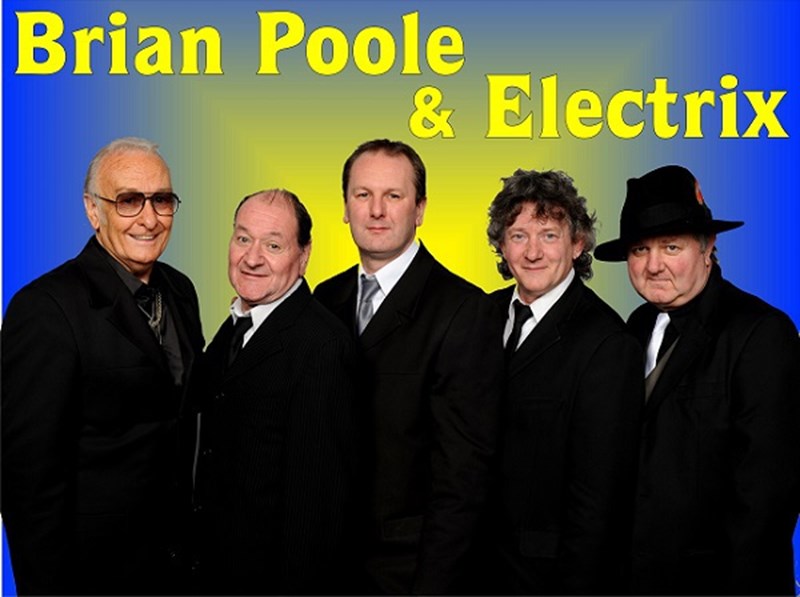 Brian Poole had a series of sixties hits with THE TREMELOES before embarking on a solo career. Brian Poole is available with his excellent live band, Electrix or as a solo artist with backing tracks...

Brian Poole and the nucleus of the original Tremeloes all went to Park Modern Secondary School in Barking Essex, where they started the band in early 1956.

Brian has spent the last 6 years almost constantly on the road, with the show 'Reelinand a Rockin' performing sell out concerts as far afield as Hong Kong, Australia, New Zealand, as well as being the first sixties show ever to perform in China. In 2007, Brian was booked to tour with the original Tremeloes comprising Chip Hawkes, Ricky West, Dave Munden, Joe Gillingham and Jeff Brown, leaving selected dates for working with his own band, the Electrix, or solo. In 2008-9 Brian toured with PJ Proby in the show ‘Oh Boy’ non-stop 60’s.

Brian was born in 1941 in the East End of London and is a true cockney, with a family who were in the hard working world of the famous London Markets. This fact led him to write a book with the title 'Talk Back'- which is a complete guide to British Colloquialism or Slang. In his career with The Tremeloes, Brian Poole completed three world tours and many UK tours, live, working in recording studios and in films, featuring a host of stars of these professions. He started his career as a studio backing vocalist and often imparts a wealth of amusing and even controversial stories about the 60's era and its stars, many of whom Brian and the Trems backed vocally on their recordings.

Brian and the Tremeloes went their separate ways, with Brian pursuing a solo career and at the same time forming his own record company (Outlook Records). When not touring with the stars of 'ReelinandaRockin' he works with his backing band, Electrix, whose line-up consists of keyboards, lead guitar, bass guitar and drums, with vocal harmonies added to give the band a great Rock 'n' Roll sound when playing all the hits, as well as a contemporary feel likened to some of the great American bands. Electrix are now back to an original line-up of Mark Francis, Ray Begg, Tony Allen and Cliff Simons.

One of Brian's more recent recording projects also had great success. Having recruited four other "Stars of the Sixties" - Reg Presley (Troggs); Mike Pender (Ex-Searchers); Tony Crane (Merseybeats) and Clem Curtis (Foundations), they became The Corporation (or more affectionately known as The Travelling Wrinklies). Their first single was the old Showstoppers hit, "It Ain't Nothin' but a Houseparty". Recently

Brian has entered into many more recording projects and has completed a new album/C.D. called ‘Antique Gold’ and a single written for him by his daughters. Also Brian presented his BBC Essex 3 hour 'live' radio show with great success. In the future, he hopes to be regularly ‘going live’ with his own style radio show, listeners' memories, competitions and phone in's.

One of his biggest thrills came in 1986 with a televised appearance by Royal Command on THE ROYAL GALA PERFORMANCE, but this was soon overtaken by the huge success of his daughters as Alisha’s Attic and as hit writers for many No. 1 artistes including Kylie & Danni Minogue, Will Young, Janet Jackson, Sugababes, Atomic Kitten, Amy Studt, Shapeshifters, Rachel Stevens and many more. Youngest, daughter Shelly Poole has penned many top 20 hits and has been busy writing songs for her own band Red Sky July, while other daughter Karen has written several top three records over this year.

With expanding date sheets for 2010 and 2011, including return visits to Scandinavia, Europe and Australia and a 4 month UK tour with the 25th Anniversary Solid Siver 60’s show and his long awaited tours with Chip Hawkes and the original Tremeloes, retirement is not an option!

Can be booked as Brian Poole & Electrix - self-contained band or solo with backing tracks.