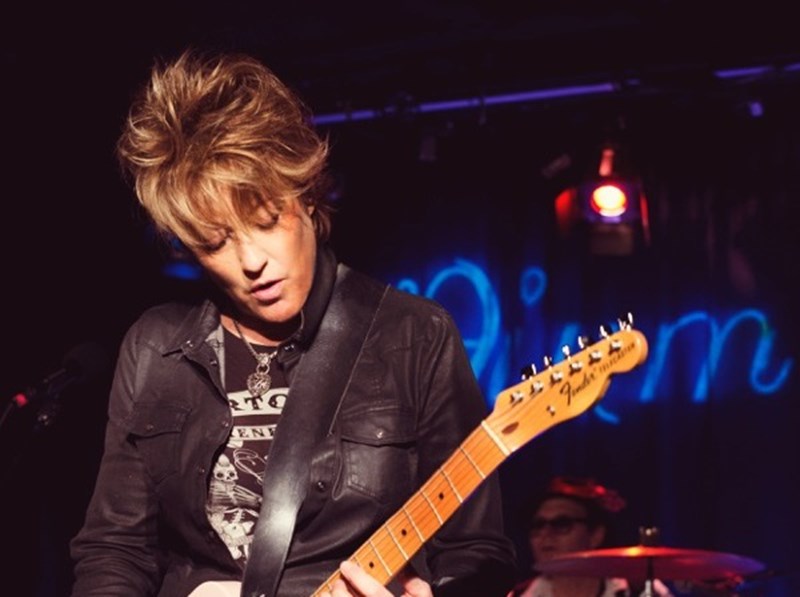 Former lead singer from Katrina and The Waves, Katrina now has a career both as a solo artist and with her new band available for festivals, venues and private events...

About Katrina ex Katrina & The Waves

Former lead singer from Katrina and The Waves, Katrina now has a career both as a solo artist and with her new band.

As a singer, Katrina was inspired by Motown, Dusty Springfield and girl groups such as The Shangri-Las and The Shirelles. In 1983 Katrina and Vince joined The Waves (a Cambridge based band with ex Soft Boy, Kimberley Rew) and she picked up on some of their musical influences such as Etta James, Velvet Underground and the Stones.

The band became Katrina and the Waves, and in 1983 they recorded an album of original material, at their own expense, which was shopped around various labels and sold at gigs. They were signed by an independent Canadian label – Attic Records and their first album ‘Walking on Sunshine’ was released just in Canada. Katrina and The Waves toured Canada in 1984 and released a follow up album ‘Katrina & The Waves 2′. Katrina and The Waves had their first big break in 1984 when The Bangles covered their song ‘Going Down To Liverpool’. This drew attention to the group and lead to an international deal with Capitol Records.

The band’s first album was re-recorded and remixed. Scott Litt who went on to produce REM and Nirvana, produced ‘Walking on Sunshine’ – it was his idea to add the drum intro which made it irresistible to radio DJs. The first Capitol album, ‘Katrina & The Waves’ released in 1985, was a substantial critical and commercial success and ‘Walking on Sunshine was a worldwide hit earning top ten spots around the globe. (No. 8 UK, No.9 US, No.3 Canada, No.4 Australia). Since then, the song has been broadcasted over 2,000,000 times in the U.S. and was the highest played track on radio in the summer of 2008 – 23 years after its release!

‘Walking on Sunshine’ has been featured in many films, including being danced to on-screen by John Travolta (Look Who’s Talking, 1989), Michael J. Fox (Secret of My Success, 1987), and Jack Black (High Fidelity, 2000). Dolly Parton covered it in her Treasures album and during the last year it was featured in the hit TV show, Glee, as well as on American Idol. “I have performed ‘Walking on Sunshine’ for so many years in so many different countries that it’s become the one constant in my life and the one thing I can count on to bring happiness to myself and others,” says Katrina.

Katrina & The Waves were nominated for a Grammy for “Best New Artist” and were constantly touring the US, Canada, Europe, Australia and Japan. Their follow up single, ‘Do You Want Crying’ was a top 40 hit in the US and ‘Sun Street’ was a UK Top 30 hit in 1986. In 1989 Katrina & The Waves recorded a more rock-orientated album for Capitol subsidiary SBK Records – ‘Break of Hearts’ which included ‘That’s the Way’ which reached No. 16 in the US charts.

The band toured worldwide with artists such as Wham, The Beach Boys, Don Henley, Pointer Sisters, Chaka Khan, The Kinks, Fleetwood Mac, Coolio and Run DMC. ‘Walking on Sunshine’ was followed by more chart hits – ‘Do You Want Crying’ and ‘Que Te Quiero’ in 1985, ‘Sun Street’ in 1986 and ‘That’s The Way’ in 1989, with performances at Madison Square Garden, The Mall, Washington DC, The Marquee Club and CBGBs where Katrina sang with Joey Ramone. Katrina was also the featured vocalist on Natalie Imbruglia’s ‘Torn’and albums made by Hanoi Rocks and Holly Valance. She recorded ‘We Gotta Get Out of This Place’ as a duet with Eric Burden and sang a guest track on Rick Wakeman’s ‘Return To The Centre of the Earth’.

In 1997 Katrina and the Waves’ ‘Love Shine A Light’ won the Eurovision Song Contest with the largest ever margin, followed by an unprecedented four consecutive appearances on Top Of The Pops and a No. 3 in the UK Charts.

The following year, Katrina and the Waves split up and Katrina pursued an alternative career on radio and TV. She was a TV presenter on Watchdog on BBC1 with Anne Robinson and was then offered her own show on BBC Radio 2 – where she presented a three-hour show, five days a week for the next year and a half. This was followed by a stint in musical theatre, where Katrina played the lead role (the songwriter Ellie Greenwich) in Leader of the Pack, singing some of the songs that had influenced her as a young singer.

In 2001, Katrina began a solo career, performing live in the UK and in Europe and resumed writing and recording. Her first solo album, ‘Katrina Leskanich’ was released in October 2005. Katrina wrote and produced many of the songs on the album, which includes collaborations with Phil Thornalley, (‘Torn’) and a stunning acoustic cover of Kirsty MacColl’s, ‘They Don’t Know’.

In 2006, Katrina put together a new band, performing their first gig at The Borderline in London.

In 2007 Katrina covered ‘Hitsville UK’ on ‘The Sandinista! Project’ – a new compilation and tribute to The Clash Sandinista! Album. And toured Australia on the Countdown Spectacular tour and Norway with Gylne Tider. Katrina’s single ‘They Don’t Know’ was included on the Gylne Tider 2 album which went platinum. The following year, Katrina had a UK club hit in 2008 with a dance version of ‘They Don’t Know’.

In February 2010 the Glee Cast had a UK Top 10 hit with a mash up of Beyonce’s ‘Halo’ and Katrina & The Waves ‘Walking on Sunshine’.

2010 – Katrina celebrated 25th Anniversary of ‘Walking on Sunshine’ with the release of a new CD, ‘THE LIVE ALBUM’ and the EP ‘Spiritualize’ was released in May 2011.

2012 – Katrina reformed her band in the UK with Darren Loveday (guitar), Ed Carlile (drums) Trevor Newnham (bass) and Steve Turner (keyboards) plus a horn section. Performances that year included the Ultimate 80s Festival, The Acoustic Festival of Britain, Rewind Scotland, Here and Now at Ascot Racecourse, Gig in The Park and the Keitele Jazz Festival in Finland plus shows in Belgium, Germany, The Netherlands, Norway and Sweden.

Available as a Solo playback performer (i.e singing live to backing track) or with at it's largest a 6-piece live band or a smaller band where space or budget is restricted.