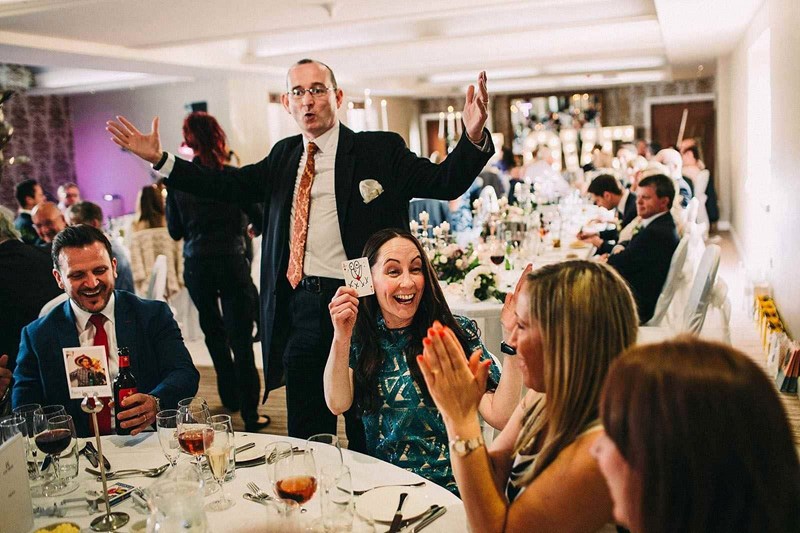 Manchester based Carl Royle is one of the leading cabaret and close up magicians in the UK today, performing his magic for a corporate events, weddings and more...

About MAGIC BY CARL

Manchester based Carl Royle is one of the leading cabaret and close up magicians in the UK today, performing his magic for corporate events, weddings and more.

Having performed many types of magic from childhood, Carl became a professional magician at the age of 25 and is now one of the busiest magicians in the country today.

Carl's expertise lies in matching good humour with stunning cabaret or close up magic. Whether he is performing close up magic at receptions, at a function, around the tables at a gala dinner or with his after dinner comedy mind reading act, Carl will always leave the audience in good humour and baffled.

Through the years Carl has been asked to perform for such companies as:

Carl's magical talents have lead to companies asking him to represent their products on exhibition stands at trade shows and to compere functions and conferences. Carl's unique skills as a close up magician come into their own and his performance will be the highlight of the evening.

Carl Royle is an all round entertainer who will enhance the enjoyment of any function with a touch of magic.

Carl Royle has had the pleasure to perform his after dinner cabaret show for many blue chip companies.

Carls blends his good humour with mind reading, mentalism and zany audience participation leading towards the performance of "The Most Difficult Card Trick in the World!"

This cabaret spot can be from 20 minutes to 40 minutes and is always a success with all audiences. The show is meant to entertain before dancing starts at any function. Carl has also been recruited to use magic and sections of his cabaret act to present at conferences and to be light relief (with a theme) at company presentations.

An alternative performance of the mind reading act is ideal for an after dinner speaking spot rather than cabaret if that is required.

Enjoy the magic and humour of Carl Royle.

Close up magic by Carl Royle will enhance any function.

With a vast repertoire that has been built up over many years performing as a professional magician, Carl uses simple props such as playing cards, coins, sponge balls (for his golden ball routine) and elastic bands.

Carl has had the honour of performing for many blue chip companies and recently came 4th in the British Close up Magic Championships and spent one year as President of the Manchester Circle of Magicians. TV appearances include a slot on Look North West with Gordon Burns.

Carl usually performs up to 3 hours if table magic is required. Carl can perform a cabaret or stage set if required.

What people say about MAGIC BY CARL

“He made the day great in my opinion, the guests couldn’t speak highly enough of him. By all accounts he is not human, he blew the guests minds!” – Mark Bell, wedding reception.