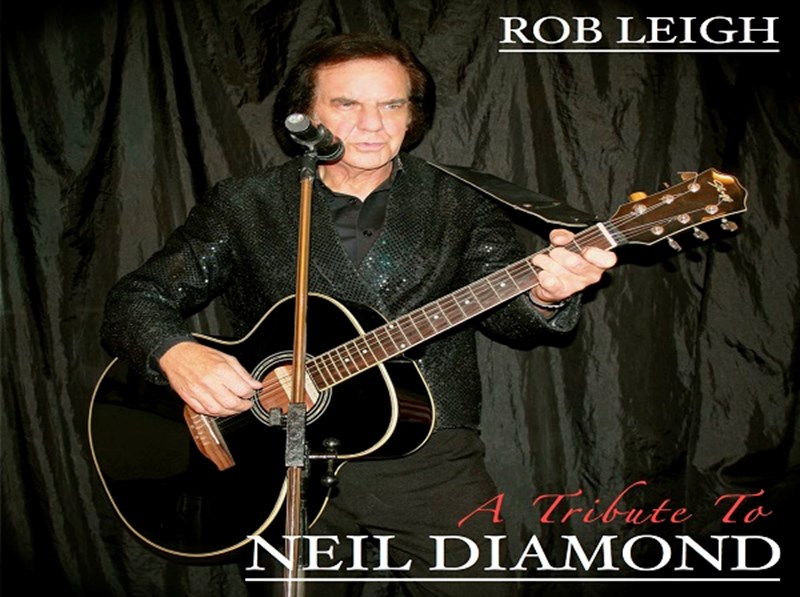 Having been compared vocally to Neil Diamond on more than one occassion, the tribute show was born in the late 80s where Rob has gone on to perform to great acclaim all over the UK and internationally...

Using full EV sound equipment with 2K of power he recreates more than an authentic sound. Careful lighting sets a warm atmosphere and a backdrop incorporates the American flag as in the real Diamond concerts, Rob adds his own personal touch to this detail with a complete range of Diamond songs.

His personal sound and lighting engineer ensures smooth running throughout the performance. Each show can be tailored to the requests of any audience and can be booked for the popular one hour special show or two sets of 45 minutes each.

30 years in the business Rob Leigh starting singing in the late 60's with one of the many bands that sprung to life that decade. He played through the 70's as a member with various bands until the early 80's when he decided on a solo career as a guitar vocalist. This led him onto the European trail where he successfully toured Germany, France, Spain, Portugal, the Canaries before he finally set his sights on the U.S.A. After America Rob returned to his beloved Manchester, England where he has now settled.

Having been compared to Neil Diamond vocally for many years, particularly in America where Diamond was King, Rob decided to take some professional advice. From that moment on the tribute show was born...

A powerful and passionate performance features Neil Diamond’s favourite songs to the delight of every audience young and old. With a hint of guitar and tambourine this is a natural and crafted tribute.

Rob is now leaving audiences screaming for more wherever he goes… His natural voice, his looks and stage show make you believe you are in the presence of Neil Diamond on a hot August night.

"He was excellent. A really good performer and a really nice guy too. Even much better than the YouTube footage I saw led to me to believe as well. He went down well." - Gary Brooks