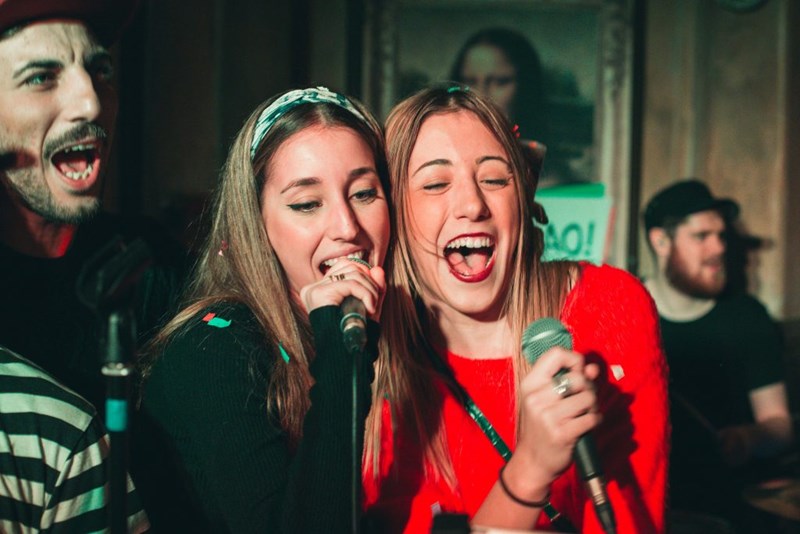 ROCKAOKE are a live rock band who play...with you! With over 200 songs available, they provide the words and the music, all you have to do is sing! Having performed for The Chris Moyles show, ROCKAOKE have been broadcast to over 8 million listeners!

The band first hit the headlines at IBIZA ROCKS in 2006 when KAISER CHIEFS' Ricky Wilson jumped on stage to sing "I PREDICT A RIOT ".

Nights with THE CHRIS MOYLES SHOW have introduced 8,000,000 RADIO 1 listeners to the ROCKAOKE concept. In September 2009, they toured with Chris to celebrate his show becoming the longest running RADIO 1 breakfast show in history!

ROCKAOKE have performed with around 30,000 lead singers, most of them enjoying a rare moment in the spotlight. But a host of top celebs have been unable to resist the attraction of rocking out on stage with the band. The more famous ROCKAOKE lead singers include Justin Lee Collins, James Corden, Jeremy Clarkson, Richard Hammond, Peter Andre, James Nesbitt etc...

Usually 2 x 60 minute sets. Full PA and sound system included. Lighting optional. All microphones, stands, music sheets etc. will be provided by the band. Optionally, the band can provide AV (on-screen) lyrics via an on-stage comfort monitor which can also feed out to plasma/projector screens for audience participation. Optional DJ service. Optional photography service - all singers recieve a framed photo as they leave the stage. Optional recording of whole event.