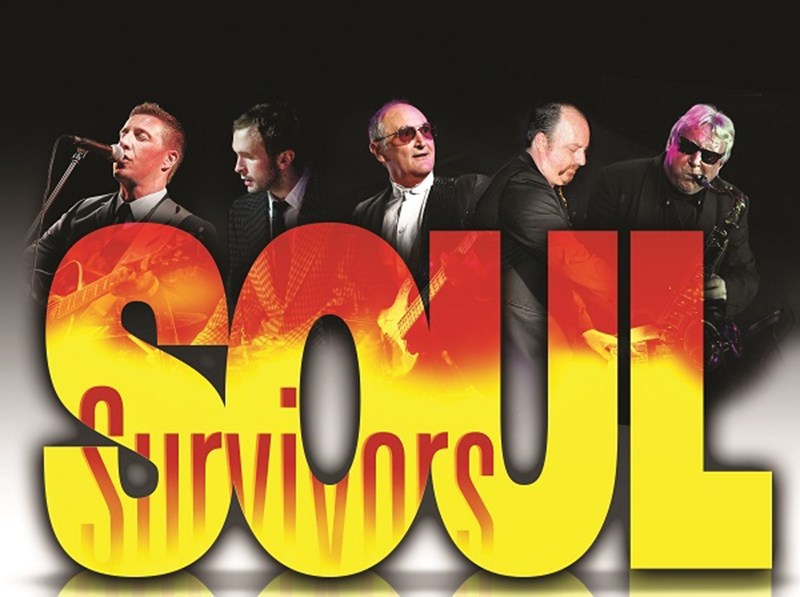 The Soul Survivors, are the countries top exponents of classic soul music, taking their inspiration and material from such greats like: Otis Redding, Sam & Dave, The O Jays, The Detroit Spinners & Marvin Gaye, delivering it with great authenticity...

The Soul Survivors, are the countrys top exponents of classic soul music, taking their inspiration and material from such greats like: Otis Redding, Sam & Dave, The O Jays, The Detroit Spinners, Isley Bro’s & Marvin Gaye, and delivers it with great authenticity and enthusiasm.

Following in those great footsteps, The Soul Survivors with their own infectious stage act, give the best of everything: Three part vocal harmonies, grooving rhythm, a top horn section, and the powerhouse lead vocals of Mel Day, not to mention all the entertainment you can handle.

Soul has played a huge part in each members career, who all boast excellent musical pedigrees, working with such names as Robert Plant, Alvin Stardust, Jaki Graham, Steve Gibbons, Screaming Lord Sutch & The JALN Band, combining years of experience in all types of venues; from small clubs to the Royal Albert Hall.

They have appeared with: The Temptations, Martha Reeves and the Vandellas, The Three Degrees, The Drifters, Johnny Bristol, Marv Johnson, Geno Washington, Edwin Starr, Freada Payne, Eddie Holman, Jimmy James, Gary U.S. Bonds & Sister Sledge - to name but a few!  The Soul Survivors have also under taken a national ten week theatre tour in Nick Pemberton’s musical soul thriller Hold Back The Night, to which they received rave reviews. They have enjoyed sell out weeks at Ronnie Scott’s, and have worked for Lenny Henry on several occasions, even choosing them more recently for his 40th birthday bash.

Over the last twelve months the band have been back in theatre, touring nationally again in the highly acclaimed Classic Soul Show while still appearing with the lady of soul herself Jaki Graham.

This band is from the same stable as the stunning New Amen Corner show.

“The Soul Survivors was exhilarating and technically fantastic from start to finish, all in all, a brilliant evening.”
Katherine Davey, Front of house manager The Grand Pavilion, Porthcawl

“The performance was a sensation with the audience awarding a standing ovation, it was a great show.”
Alan Tabelin, Lowestoft Journal. (The Marina Theatre, Lowestoft)

“There is no denying The Soul Survivors music is foot-stomping, handclapping, hipswivelling fantastic, who had the audience up and dancing all night”
Sue Wilkinson - Gloucestershire Echo (Everyman Theatre, Cheltenham)

“The Stars of the show were The Soul Survivors a six piece band, who turn out a stream of superb soul classic’s like the professionals they are.”
David Hotchkiss, Express & Star, Wolverhampton. (The Grand Theatre, Wolverhampton)

“A rapturous reception, the audience bopped in the aisles, during the final blistering set from the brilliant Soul Survivors”
Joe Sweeney, Reed Newspapers Ltd. (The Grand Theatre, Wolverhampton)

“The Soul Survivors, an excellent band, who perform all the old favourites, delivered with panache, the numbers, Love Train, Hold Back The Night, Ms Grace, had the audience dancing around their handbags”
Sally Fowler, Lancashire Evening Post. (The Charter Theatre, Preston)

“Soul music is their thing, The Soul Survivors, belts it out, good stirring stuff, which was hugely appreciated by many”
Paul Downey, Stage & Television Today.

“Lots of good soul music and if you like it soulful and powerful, then The Soul Survivors will be your thing.”
Georgina Daly, Eastbourne Herald. (Devonshire Park Theatre, Eastbourne)

“Believe you me, The Soul Survivors were superb, definitely a night to remember”
Barry Lowe, The Stafford Newsletter. (The Gatehouse Theatre, Stafford)

“By the encore, everyone is on their feet, even the usherette is clapping and as Otis might have said, Respect."
Mike Atherton, Echoes. (Devonshire Park Theatre, Eastbourne)

“Last Night the Town Hall was transformed into a huge party, The Soul Survivors had all the audience shaking their tail feathers, the band was immaculate, they have been blessed from high with the spirit of soul.”
Sarah Maybank, Gloucestershire Echo. (Cheltenham Town Hall)

“The sound of soul raised the roof at Theatre Hafren on Saturday night, when The Soul Survivors blasted out their show, a great night out, and long may this band continue to treat audiences to such soul classic’s”
Trevor Hughes, County Times. (Theatre Hafren, Mold)

"Absolutely fantastic they went far beyond what we expected, everyone said what great musicians and entertainers they were. Please thank them for contributing to a night we won’t forget." - Frank Neal, Kings Lynn Corn Exchange.