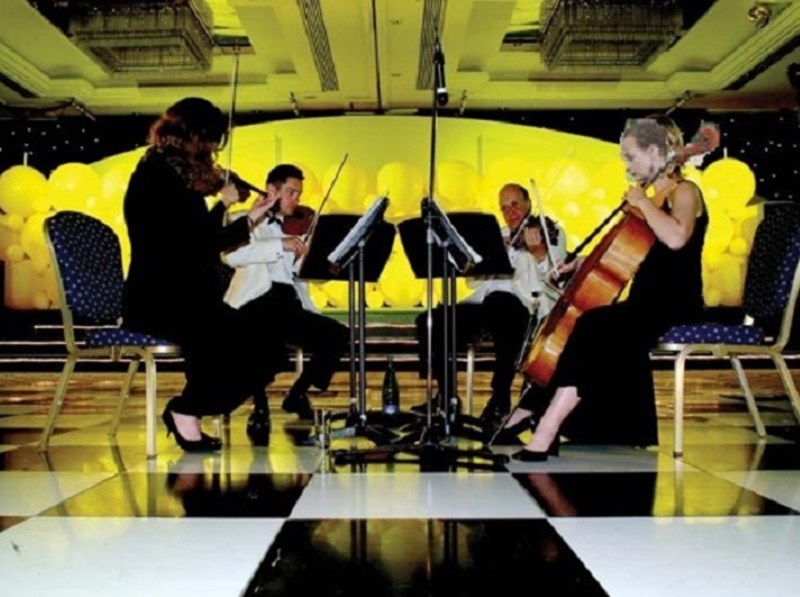 Status Cymbal are the String Quartet with a difference. As well as playing the works of Mozart, Beethoven and all the other great composers for the medium, they are also able to off a unique library of sparkling/witty arrangements of contemporary music.

Status Cymbal are the String Quartet with a difference.

As well as playing the works of Mozart, Beethoven and all the other great composers for the medium, they are also able to bring the same dedication of performance to a unique library of sparkling and witty arrangements of all kinds of popular music. From Opera through to Swing and Jazz to the great Musicals, Pop hits and Rock classics, including tunes by the Rolling Stones, the Beatles, Abba and many more!

Status Cymbal are available for concerts, weddings, product launches and all other kinds of function both corporate and private, together with entertaining in hotels and restaurants and on board cruise liners. Whatever the occasion, their fully professional approach, and at a very competitive price, will ensure the success of any event.

A native of Saddleworth in the West Riding of Yorkshire, GILL AUSTIN began playing the violin from an early age and went directly from secondary school to the Royal Academy of Music, studying with the established French soloist and teacher Maurice Hasson. She plays regularly with the City of Birmingham Symphony Orchestra, the Royal Philharmonic Orchestra and with Welsh National Opera. She has led the orchestra for the Thursford Xmas Spectacular in Norfolk for the past eight seasons, and is occasionally invited to Norway to work with the Bergen Symphony. Despite her Yorkshire roots, she is an avid supporter of Manchester United

The newest member of the quartet, DAVE WILLIAMS was born in Rugby and educated at the town’s well-known public school before going to the Royal Academy of Music where he studied with Derek Collier. During his time there he was awarded the Roth Recital and the Bearer prizes as well as the Florence Whitlock scholarship. Since graduating from the Academy he has pursued a varied career both in the UK and abroad and has worked with the London Musici and Ballet Rambert and also appears regularly on TV backing singers including Emma Bunton and Dido. He enjoys shooting and the occasional game of football, being also a follower of Tottenham Hotspur

PAUL APPLEYARD also comes from Yorkshire, being born in Dewsbury in 1951. He began learning the violin at Oldershaw Grammar School in Wallasey but soon switched to the viola and took lessons with Andrew Thomas, then Principal Viola in the Royal Liverpool Philharmonic Orchestra. From school, he studied Law at Kings College London before entering the Royal College of Music as a postgraduate, where his professor was Frederick Riddle. He spent two years in the Netherlands Radio Philharmonic Orchestra before returning to the UK to freelance. He has worked with all the major London orchestras and those of the BBC as well as spending short periods as Principal Viola with the Ulster, Scottish Ballet and London Festival Ballet orchestras. In 1988 he was invited to join the Scarborough Spa Orchestra, where the quartet was founded and where his interest in arranging began, producing many numbers for both the orchestra and the quartet. His major spare-time activity is in the classic car movement, being the proud owner of a much-cherished Triumph Stag, and is also a member of the Jaguar Drivers Club. His viola was made for him in 1974 by the celebrated modern luthier Sergio Peresson, in Haddonfield NJ

UNA BIRTCHNELL began studying music at an early age in Bristol. She continued her studies at the Guildhall School of Music, receiving scholarships to complete the Advanced Solo Studies course. Her education continued at L'école Normale in Paris with Raphael Sommer, where she won the Premier Prix and the Jean Toussaint Bach Prize. Her career combines orchestral, chamber and solo playing with many ensembles, from London Mozart Players to Portishead. She plays with the Ulster Orchestra, London Concertante and London Soloists. Una performs regularly with her partner, pianist John Human, at chamber festivals and for the Council for Music in Hospitals. She tutors at the City Literary Institute and plays on a modern instrument by Tony Padday.

So, whether it is a concert, conference or wedding, a special party, a corporate event or a banquet, playing the works of the classical masters or music from their unique arrangement repertoire, STATUS CYMBAL will be delighted to entertain you.

Reviews:
“Thank you so much for your fabulous performance at our wedding on New Year’s Eve. We were over the moon with Heroes and the sheet music you gave us was a wonderful surprise. Thank you for being a part of our amazing day”

“May I also take this opportunity to thank you and your group for providing us with such a lift to our programming and for remaining in such good humour for the many hours you were with us, it certainly brought some festive joy to the offices” – QVC Shopping Channel

“Banish all previous conceptions of a string quartet from your mind – STATUS CYMBAL are definitely different. They gave us a brilliant classical first half programme then a fun-packed romp through the 20th Century in the second half. It was a pleasure having them with us and their performance was thoroughly enjoyed by our audience of over 800 members” – Clacton & N.East Essex Arts and Literary Society

“Thank you so much for coming to play to us at Goldsmiths’ Hall last night. Your programme was perfect. You found some very ingenious solutions to the ‘Gold’ challenge and the inclusion of some Gershwin and Victor Sylvester nostalgia was extremely well suited to our older audience. We are most grateful to you all and thank you again for being so accommodating over our requirements” – Concert for the Queen Elizabeth Foundation

I would like to thank you for the marvellous concert at Kew last week. I thoroughly enjoyed the performance and I am sure the rest of the audience did as well. There were some really nice comments from people as they left, and in fact a couple of people went to the effort of phoning me the next day to say what a nice evening it was, and how good you were” – Friends of Kew Gardens

“The Beethoven Quartet in C Major Op 59 No 2 (Razumovsky) was skilfully handled with much attention paid to phrasing and rhythm. After the interval a lighter side of their repertoire which consisted of music from the last century. The audience went home, without doubt, humming many of the tunes of yesteryear, which will always remain in the mind” – Tiverton Spring Festival

“I have had the pleasure of engaging STATUS CYMBAL on two occasions this year and found them to be thoroughly excellent and professional in every way. Their repertoire and musicality was appreciated by both our passengers and ourselves and I will have no hesitation in using them again should the opportunity arise” – P&O Cruises

“Everything went really well and the string quartet did a super job for us – they were really flexible (some of the timings changed on the day but they handled it really well) and I had loads of positive feedback from people about them. So thanks for making our VIP opening event such a huge success” – Roche UK