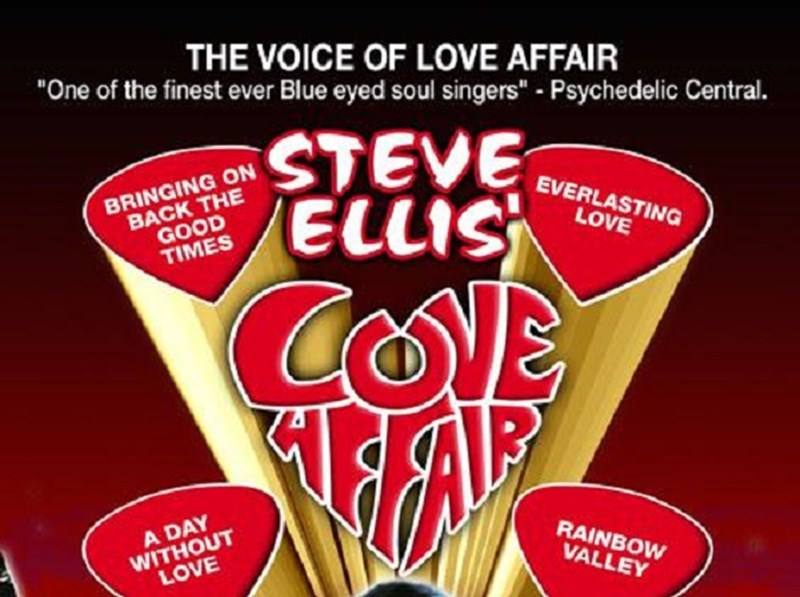 The voice of The Love Affair, Steve Ellis is back out on the road again performing the classic hits, Everlasting Love, Rainbow Valley, A Day Without Love and a sprinkling of soul/60s classics.

Steve first found fame at the tender age of 17 as the lead singer with one of the most successful British pop acts of the 60s, The Love Affair. Recording such classic's as Everlasting Love, Rainbow Valley, Bringing on back the Good times, One Road, A Day without Love ….etc which made them one of the biggest bands of 1968 with only The Beatles out selling them that year.

In the autumn of 1969 Steve left The Love Affair to re-think his musical direction. CBS retained him as a solo artist and he went on to record the soundtrack for the 1970 film classic Loot staring Lee Remick & Richard Attenborough before going on to form Ellis with Zoot Money and later Widowmaker with Luther Grosvenor (Ariel Bender). With a succession of singles, albums and tours, (including a world tour with The Who with his life long friend Roger Daltery) he sadly never again tasted chart success.

In 1981 his career was cut painfully short, when he suffered a horrific accident after retiring from the music business. But over the years a brave fight to regain his mobility has brought him back to music once again. He recorded a charity single (Step Inside My Love) for the NSPCC in 1998 with his old friend Paul Weller who also appeared along side Steve at the Steve Marriott and Ronnie Lane Memorial Concert at The Royal Albert Hall.

Steve released a new studio album "Best of Day's" which attracted rave review's and currently he is working on his biography with Chris Welch (Melody Maker Journalist Legend) and is back on the road performing live, once again.