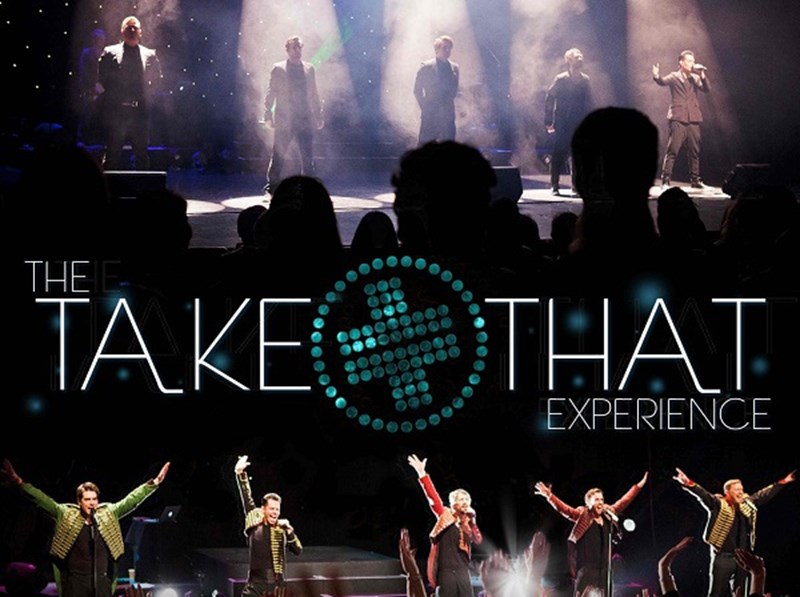 Take That Tribute Band - The Take That Experience

The Take That Experience bring you all the thrills of this hugely popular act. This Take That Tribute Band provide your audience with a show that has all the versatility, humour, experience and magic of the real Take That!

About Take That Tribute Band - The Take That Experience

The Take That Experience bring you all the thrills of this hugely popular act. A tribute show you will "Never Forget".

The ultra talented members of The Take That Experience provide your audience with a show presented with all the versatility, humour, experience and magic of the real thing!

Take That have had 10 No. 1 singles and 4 No. 1 albums in their career and those numbers are set to rise. The phenomenon that is Take That are back for good!

The Take That Experience show features all the hits from the 90's such as 'Back for Good', 'Relight my Fire', 'Pray' to the new recent hits such as 'Patience', 'Shine', 'Rule the World' to the brand new album 'Progress'.

A full 5-piece show featuring a fabulous Robbie lookalike and soundalike! Book it. See it. Live it. The Take That Experience.

The Take That Experience provide a 1 x 70 mins show or 2 x 45 mins - self contained with their own P.A system & lighting.

The Take That Experience can offer both 3-piece and 5-piece line-ups.

"Richard, The Take That Experience were absolutely amazing! It was rather an expensive birthday present for my daughters(!) but it was worth every penny. Thank you so much for your help. I don’t know if you can but would you thank the band for me, it couldn’t have been better had they been the real thing. Thank you for making it an amazing evening for all who attended" - Genette Shaw

"I am able to confirm that the Take That Experience were absolutely fabulous and were great entertainers.  Not only did they look like Take That, but they also danced too." - Emily Jauncey, Three Counties Showground

"They smashed it. One of the best tribute groups we've had to date!" Damien Stone (GM Escape Nightclub, Colchester)

"The Guys were fantastic and I would have no hesitation in recommending them. I have already made a comment on their facebook page!" Glen (Elms Events)

"Well, what can I say! They were accommodating, professional and actually pretty talented too. They didn't just stand on the stage and sing, they worked the crowd! It really did make a difference. Thank you for your support with our event, which has proved to be a success for Ramsgate Round Table and in this case, Demelza House Children's Hospice who are the sole beneficiary of the proceeds from this event." Gareth (Ramsgate Round Table)

"I just thought I'd send a quick e-mail to say how impressed I am with The Take That Experience. As one of Take That's biggest fans, and after seeing a couple of tribute acts, I wasn't expecting anything great. I work on Reception at Romney Sands (where I watched them perform last night) and they all popped in. I was impressed from the start, they had a good sense of humour and looked quite similar to the Take That boys. Their set started and immediately I was amazed by their talents and their ability to impersonate the Take That boys. I was VERY impressed with Nik's performance of Mark Owen. His mannerisms and voice were almost exact and his energy was second to none!! For the whole show, The Take That Experience had the audience transfixed and pretty much eating out of the palm of their hands!!"
Amie Jenner (Romney Sands)