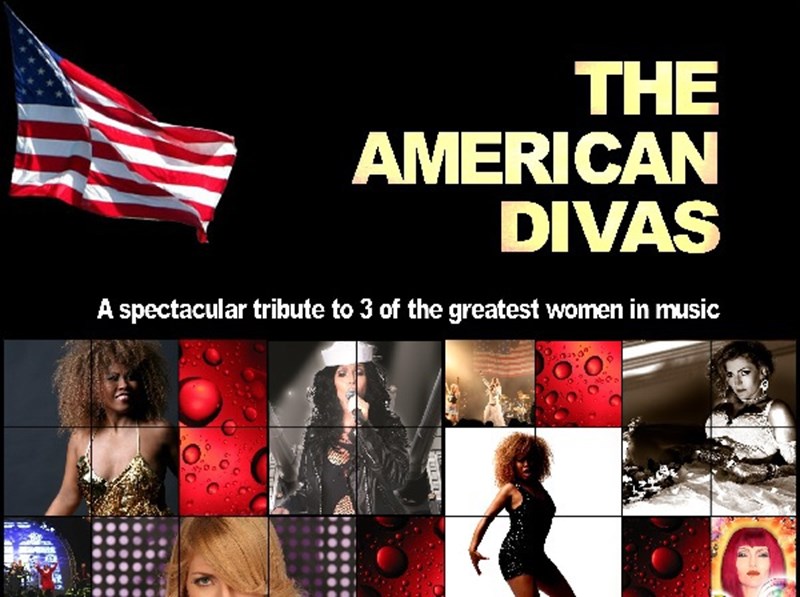 The American Divas is a spectacular tribute to 3 of the greatest women in music, Madonna, Cher and Tina Turner backed by an incredible live band and/or dancers...

About The American Divas - Tribute Show

The American Divas is a spectacular live tribute to 3 of the greatest women in music, Madonna, Cher and Tina Turner backed by an incredible live band and/or dancers...

More about the show...

The American Divas reveal their uncanny copycat to the Material Girl herself, Madonna. The striking choreography and couture costumes based on originals by Gaultier and Givenchy are the ultimate tribute to the Queen of Pop's famous sell-out tours. With hits including VOGUE, LIKE A PRAYER and HUNG UP, we are reminded exactly why Madonna is the biggest selling female artist of all time.

With a remarkable recreation of Cher's spectacular tours, the cast draw the audience into Cher's crazy world of flamboyant hair and outrageous costumes. Topped off with that distinctive deep, rich voice and dry wit, the show features all the greatest hits including the classic TURN BACK TIME, THE SHOOP SHOOP SONG and Grammy Award winning BELIEVE.

Exploding to the stage is West End performer Karin Bello, who throws herself heart and soul into the incredible ball of energy that is Tina Turner. With the voice, the legs and the dynamic stage presence of Tina herself, Karin leads the dancers across the stage with a strut, a shimmy and a shake to hits such as THE BEST, RIVER DEEP MOUNTAIN HIGH and PROUD MARY.

The full show can run up to 2 hrs if required.

The American Divas can also perform either a 1 x 60 minutes or 1 x 90 minutes set.

The show is also available on playback with the 3 tributes or with 2 dancers, or with live band and dancers!

What people say about The American Divas - Tribute Show

"Hi Richard, Thank you for your email. It was a great evening thank you, the band, dancers and singers were brilliant!" - Ginny – Oake Manor, Taunton

“They were absolutely awesome and an absolute pleasure to work with, one of the best!” – Emma Gosling, China Rose, Bawtry

"It went REALLY well! They were so GREAT! Please do pass on our great thanks to the Divas, they were brill! Thanks again for some first class acts." - Sue Bolshaw, Allen Carr's Easyway International.

“WOW, what can I say? The American Divas were AMAZING! The best live act we have had on the Park ever! If you organise them again somewhere close to here will you let me know as I would actually love to see them for myself without working. They were all such lovely down to earth people and a pleasure to work with! Look forward to working with Henderson Management again in the future.” – Ronny Bartaby-Taylor, Cosgrove Park.