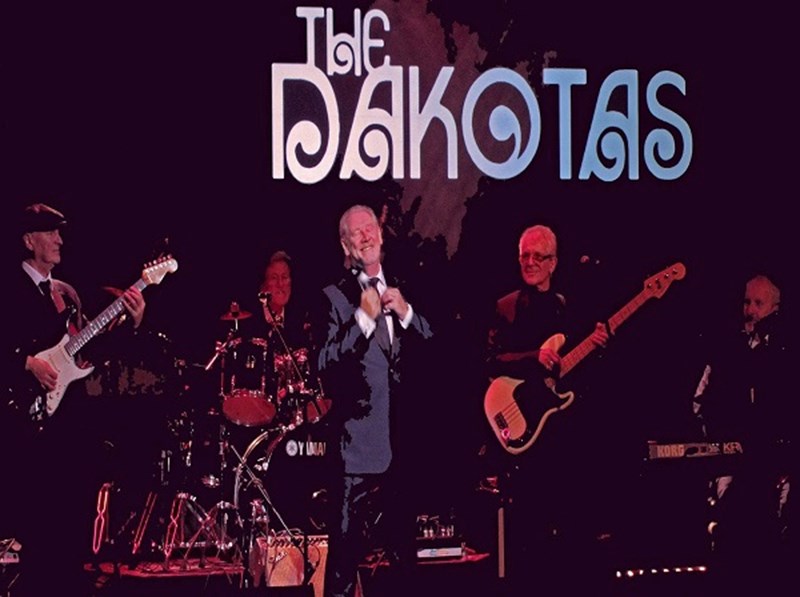 Still hugely popular, The Dakotas continue to tour venues all over the country...

The first studio album since the 60s "The Dakotas -Volume 1" was released in August 1991, including a contemporary orchestrated version of the 1963 hit single, "The Cruel Sea". In April 1992 the Dakotas did a three week tour of Sweden with fellow Manchester band, Herman's Hermits. Between 1992 and 1994 the band appeared all over the UK, as well as regular trips to Germany.

In 2003 the Dakotas released their fourth studio album, "Everlasting", to coincide with a massive 70-date "Solid Silver 60s" tour of the UK and Ireland.The tour also featured the Searchers, Wayne Fontana, Dave Dee and Barry Ryan, and ran from February until May 2003. Later that year, the band's keyboard player, Toni Baker wrote the theme music, and the Dakotas were among the session musicians for the immensely successful British TV comedy series "Phoenix Nights", starring Peter Kay.

In the spring of 2004 the Dakotas undertook yet another major 50 date UK theatre tour, teaming up once again with Peter Noone and Wayne Fontana, plus Bryan Hyland and John Walker of the Walker Brothers. To tie in with the tour, the band released their fifth album, "Strong" named after the title track I'm Gonna be Strong originally recorded by Gene Pitney. Almost straight after the tour, Toni Baker started co-writing the new music with Peter Kay for his TV series "Max and Paddy's Road To Nowhere". The show also featured Tony Christie singing the theme song, also co-written by Toni & Peter Kay.

The Dakotas were filmed in an episode of Peter Kay's "Max and Paddy", which was eventually broadcast in October 2004. Dressed as various 80s characters, the band performed and also backed Peter Kay on "I Guess That's Why They Call It The Blues".

In August 2004 tragedy struck, when guitarist Mike Maxfield suffered a stroke and had to stop performing, although he is still actively involved behind the scenes. Richard Benson, who had worked with Toni on the Max & Paddy recordings, joined the band as lead guitarist but due to his heavy teaching schedule, couldn't commit to long-term involvement. Alan Clare has now taken over the role of the band's lead guitarist.

In spring 2007 the Dakotas again toured the UK along with The Searchers, The Merseybeats, John Walker & Wayne Fontana on the Solid Silver 60s Tour. Once again a new CD was released to coincide with this tour. The CD, called "Evolution" to mark the changes undergone by the band over the last few years, features many new songs including an original song specially written for the band by Toni Baker called "Falling From Heaven". There are 17 tracks in all. You can hear and download some these songs on the music player at the top of the MySpace page Anyone wanting a copy of the CD can email the band at [email protected]

Eddie Mooney joined the Dakotas in the late 80s after being a member of the band "Park Avenue". The drummer in that band was Tony Bookbinder, who had been the original drummer in the Dakotas, and this connection eventually led to the reforming of the band with Mike Maxfield. After fronting The Dakotas for 20 years, Eddie amicably left The Dakotas in January 2008 to join The Fortunes after their long-standing frontman, Rod Allen sadly passed away.