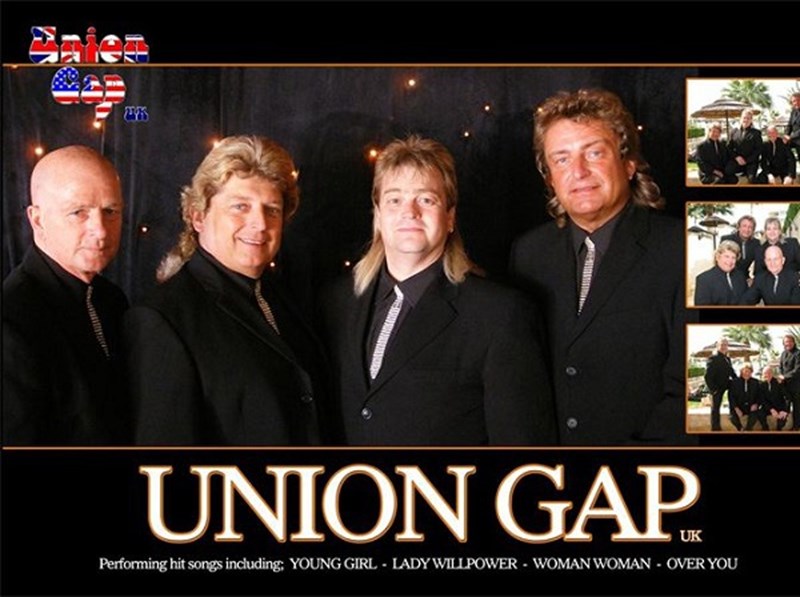 The Union Gap has worked extensively to put together a repertoire of classic songs from the 60s to 90s, which they perform either in the original form or in their own unique style – many of which appear on their albums...

In 1974 “Young Girl” was re-released in the UK and although Gary Puckett was now pursuing a career in acting along with his solo music projects, the new “Union Gap” was put together to promote the record in the UK and “Young Girl" was yet again a smash hit reaching No.6 in the UK charts. Eventually the band went their separate ways – all having great success recording and performing with many major artistes. The band were approached on numerous occasions to re-kindle the magic of the “Union Gap” but due to their individual contracts it was not possible, until in 1996 Mike Ellis (Keyboards & Vocals), Gerard Rogers (Drums & Vocals) and Barry Ruther (Guitar & Vocals) were able to launch the “New Union Gap” as a tribute to Gary Puckett bringing in the very talented - Tom Harding - on Bass Guitar / Lead Vocals.

The “New Union Gap” was an instant success on the 60’s circuit playing at all the major festivals, theatres and holiday centres throughout the UK and more importantly keeping the music of Gary Puckett and the Union Gap truly alive and vastly increasing airplay of their hit singles on Radio stations throughout the UK.

In December 2000 when Barry retired, Tom took on the role of Guitarist / Lead vocals, and the band recruited Simon Paul – a young and exceptionally talented musician / vocalist to take over on bass guitar & together with Tom kept the harmonies tight.

In 2006 Simon decided to depart & live in Fuerteventura & the band immediately recruited Graham James a talented bass guitarist with again a great vocal range & a wealth of experience.

January 2007 saw another change when the band welcomed the drums & vocal talents of Ian Tandy.
In March 2008 Graham James was made an offer he couldn't refuse which saw him leave the band & in came Paul Cornwell, another veteran of the 60s circuit with a pedigree second to none thus maintaining the Union Gap professionalism, musicianship & attitude.

The band has worked extensively to put together a repertoire of classic songs from the 60s to 90s, which they perform either in the original form or in their own unique style – many of which appear on their albums “This Time Around”, “Classics” & "By Request". The band have also devoted a great deal of time and effort to perfect their concert sound, which is always complimented wherever they appear.

The "Union Gap" are a professional band, fully self contained with concert sound and lighting, are experienced in – and available for – work in Theatres, Cabaret Venues, Holiday Centres and Cruise Ships throughout the UK and overseas. The “Union Gap” are very proud of their increasing popularity and outstanding reputation for their friendliness and professionalism both on and off stage which makes them an instant hit with audiences, venue management & staff, sound/lighting/stage crew and entertainment agencies.