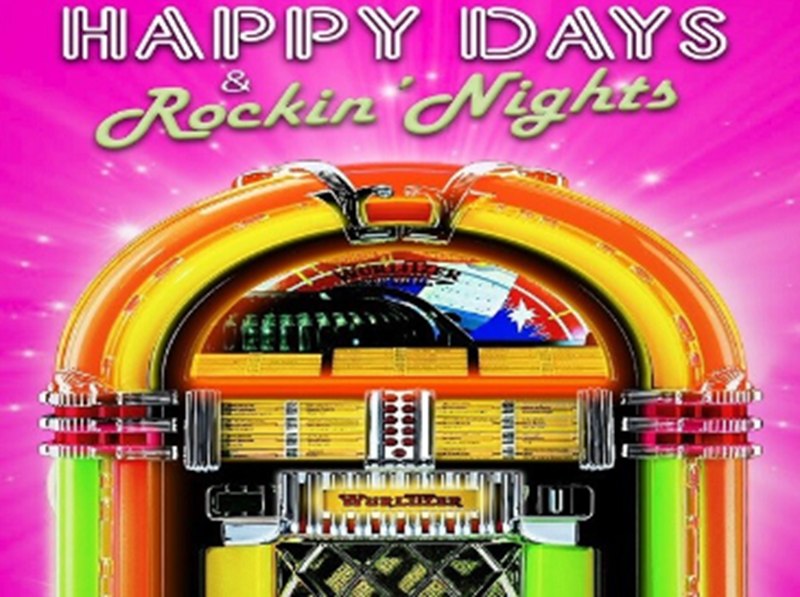 As fifties fever strikes, put on your pedal pushers and poodle skirts as you hip swing & hand jive onto the dance floor. You’ll be rocking and rolling all night long!

Two of America’s hottest screen sensations combine to give you a non-stop rock n roll fest with ‘Happy Days & Rockin Nights’. Whether you’re a fan of the finger clicking Fonz or the slick haired greaser then this show is for you!

Our very own leather clad smooth operator has the sex of appeal of both these teen screen idols and is ready to entertain you alongside his rock n roll party queen! Girls get ready to be swept off your feet as he serenades you with ‘Sandy’ and you sing your heart out to ‘Hopelessly Devoted’. As fifties fever strikes, put on your pedal pushers and poodle skirts as you hip swing & hand jive onto the dance floor. You’ll be rocking and rolling all night long!

The stars of Happy Days and Rockin Nights have been performing together for over a decade. They are no strangers to the world of entertainment and over the recent years this highly trained, professional team have worked with some of the UK's top function bands, performed in numerous West End Musicals including Mamma Mia, Cats, Les Miserables, Fame, Grease, Evita, Oliver, Billy Elliot and Blood Brothers. The team have also performed on major cruise lines such as Royal Caribbean, Celebrity, Holland America, Fred Olson, P & O, Carnival and Princess. In addition, they have appeared in TV shows, films, commercials and their voices can often be heard on TV and radio adverts as well as performing backing vocals for well know recording artists & bands. The team have quite a CV!

As well as providing live entertainment for well-known personalities including none other than the British Prime Minister, Happy Days and Rockin Nights have performed at private parties, weddings, Jewish functions, corporate events including award ceremonies and product launches, golf clubs, casinos, clubs & restaurants...  the list is endless.

"The guys from last night were totally awesome, thank you for help making our day so special." - Kate and Luke Murphy, Wedding, 2018

“An exceptionally high standard of entertainment, with full on audience participation and non-stop interaction with us! Everyone commented on how amazing and exciting the whole set was! Thoroughly recommend!” – Caravan Club Anniversary, Hertfordshire

“I wanted to send you a note to say a massive THANKYOU for being just totally awesome and for making Stephanie's hen night to remember! She was blown away by it all and we were all so impressed by how professional you both were, simply brilliant and as mega Grease fans it far exceeded what I was expecting. You were so helpful in helping me organise the night and gave me some great ideas for songs to get the party rockin'. Nothing was too much bother, and knowing that I had a professional company there to be part of my sister’s once in a lifetime hen party celebrations was just what I needed. I would recommend to anyone and everyone!” - Hen Party, Southampton