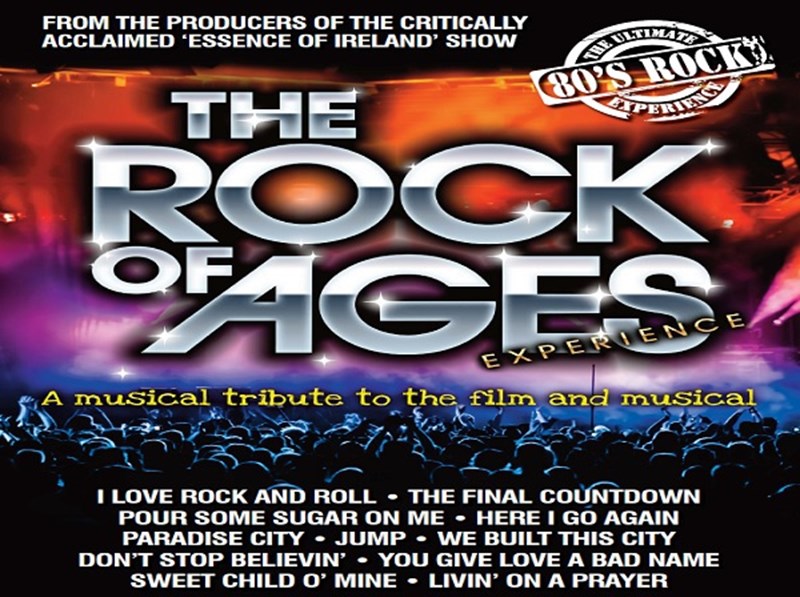 An amazing tribute to the music of the smash-hit Hollywood musical and film featuring the biggest rock classics of the eighties!

About Musical Tribute Band - The Rock of Ages Experience

Welcome to The Rock of Ages Experience - an amazing tribute to the music of the smash-hit Hollywood musical and film.

The rock classics of the eighties go from strength to strength, as they perform some of the greatest rock songs of the decade. From Bon Jovi and Guns N Roses to Journey and Whitesnake - this six piece band will rock the house to it's very foundations! If you want a night of rockin' eighties fun - you've got it!

Not only do they perform the best songs from the film and musical, they also incorporate the best of the rest in 80's rock classics.

The Rock Of Ages Experience is totally unique in tailoring the show to your requirements, from large corporate events to intimate private parties and weddings - the choice is yours! The band pride themselves on their quality performance and professionalism. It's more than just a show, its a truly unique experience!!

“The band were awesome and an absolute delight to host as well. They were very professional, very talented and were a perfect headline act for our Messtival. I would certainly recommend them to anybody; both for a small function like ours but also a bigger event as well. Really well done to all of them and many thanks for a great night.” – Claire Masters, Princess Royal Barracks, Deepcut


“The 80s tribute band Rock of Ages Experience jumped in at short notice to do a free show at the Robin2 when the planned band had to cancel. For the many people who attended including us I don't think they were a poor substitute but rather a great chance to see this new band who play the songs (and others from the era) that feature in the Musical and movie “Rock of Ages”. Both by the way are well worth seeing!
The six-piece look and sound the part with two vocalists, Jess D'Silva and Andy Earnshaw sharing singing parts with voices that complement each other wonderfully. There's a great chemistry and musicality between them as they run through 30 songs in a set full of classic 80s rock including Here I Go Again, Pour Some Sugar on Me and of course Don't Stop Believin'. Ian Aird handles the guitar parts (with Andy joining in sometimes) and given the wide range of songs he has to play he does a pretty good job as do the other musicians on board.

They're doing shows soon and well worth seeing if you want a night of good fun and rockin' music from a time when rock ruled the world.” Carrie-Anne Grove, ROX Rock n Metal


“I would just like to reiterate what I said on Saturday night at Southam Rugby Club. You were all absolutely fantastic and thank you so much. We have been running this event for 8 years now, and I can hand on heart say you are the best band we have had!
The feedback we have had was great, even from people listening in their back gardens in the town! You were so tight with your playing that you would have thought it was the artist themselves up there. Keep up the great work and please let us know if you are ever local to us as I'm sure you have gained some new followers from this wonderful gig.
Anyone who is looking for a rock band who are tip top - you have found them, look no further and rest assured that you will not be disappointed. We wish you every success in the future and who knows we may see you again I certainly hope so from all at Southam Rugby club.” - Daniel Winfield, Southam Rugby Club