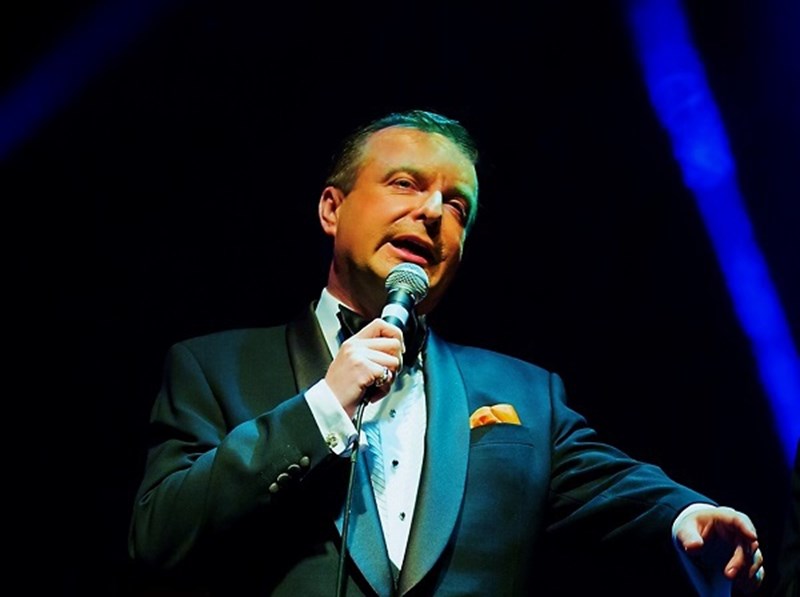 Each song is a Sinatra classic and David performs them with the style, fun and class of the master. As Peter Hepple of The Stage commented "This is a near perfect impersonation when both singing and talking". David leaves audiences spellbound...

David's long career in the entertainment business started at London's prestigious Italia Conti Academy of Music & Dramatic Arts, where he trained for three years. This prepared him for many acting roles and a spell with the respected 'Break A Leg' touring theatre company.

Television appearances include 'Lovejoy' and 'Inspector Allan' for BBC and most recently 'Never Never' for Channel Four.

These acting skills have certainly been useful throughout David's career as although he is known as a high quality cabaret performer, it is his unique portrayal and tribute to the legendary FRANK SINATRA that has brought him rave reviews around the world and earned him the respect of both his audiences and fellow professionals.

His portrayal of Frank Sinatra is unlike any other, as he not only sings and phrases uncannily like The Chairman of The Board, but also talks in an incredibly authentic Sinatra manner, leaving audiences spellbound.

As a solo performer he appeared with his own trio at many jazz venues across Britain. This trio featured the cream of British jazz including: Bobby Worth, Brian Dee, John Pearce and Matt Miles and was often augmented by the likes of Digby Fairweather and the late Spike Robinson.

In the recording arena, David was a featured vocalist at the age of only seventeen on the album 'Here's To The Band' featuring Don Lusher, Kenny Baker and a full orchestra conducted and produced by famed producer Nick Ingman.

Known on the circuit as Britain's Number One tribute to Ol' Blue Eyes, David has toured Britain with his show 'Frank Sinatra - His Way' and visited Denmark and Sweden with the 'Salute To Sinatra'.  Constantly in demand as Sinatra, David played to 5000 people at an event sponsored by Nortel at Alexandra Palace in London. This was followed by a sell-out show 'Tina & Rod - It Takes Two' with special guest Frank Sinatra at the Dominion Theatre in London's West End.

David then toured as Sinatra in the successful production 'The Fabulous Vegas Boys!'. He had another first when he was asked to appear as Mr Sinatra at the launch of a prestigious new London Casino. This was followed by a 10 week engagement at Britain's first Casino Showroom, which was opened by 'The Rat Pack Is Back!', alongside the likes of Kenny Lynch and Joe Longthorne.

As a result of his incredible similarity to Sinatra's voice even when talking as Frank, David has been used as Frank Sinatra in various radio advertising campaigns and he has been seen by millions of television viewers on 'London Tonight' and 'Barrymore' for ITV.

In 2004 David appeared with 'The Rat Pack Is Back' and their Big Band in open air concerts in front of over thousands of people at various National Trust venues.

2005 saw even more success, including a performance in front of over 25,000 people as pre match entertainment on the pitch of Crystal Palace Football Club and over 35,000 people at the 'Fireworks Fantasia' concert with Max Bygraves and The Birmingham Symphony Orchestra held to commemorate VE day.

But perhaps the highlight of David's career so far has been a recording session that took place at The Abbey Road studios with a 35 piece orchestra, when David was asked to recreate the original Sinatra recording of 'New York, New York' to promote the new Atari computer game 'Tycoon City - New York' which was released worldwide in 2006.

The Producers claimed that they had listened to every Sinatra impersonator in the UK and USA and that David's vocals were by far the most accurate and natural. Now that really is a complement!

Available as solo tribute with recorded live backing band, or with a live band.

To add a little more glamour to the event, he can also provide stunning Vegas Showgirl dancers and special guests such as Judy Garland, Nancy Sinatra, Barbra Streisand or even Elvis!