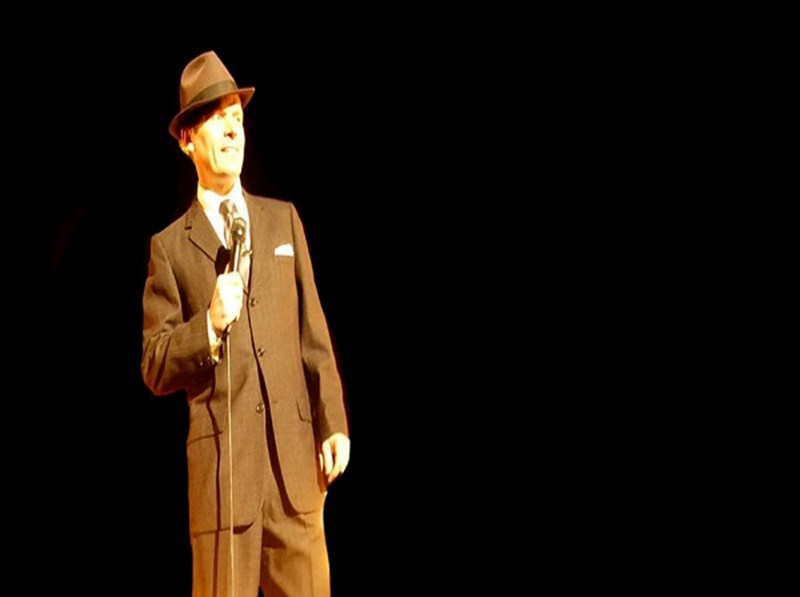 About Frank Sinatra Tribute Act - Just To Be Frank

Booked to appear at venues all over England, Phil and his Trio made their overseas debut on tour in the Middle East (DUBAI), the tour was filmed by Yorkshire Television and made into a 30 minute Documentary, shown on T.V.at Christmas, called JUST TO BE FRANK. this was a big leap for Phil covering his career from Karaoke to Cabaret. He has had numerous Radio and T.V appearences and also now appears in a book, named ‘Morley Entertainers’.

Mark Richie of the Stage magazine wrote "This young man has successfully adopted the look and sound of Sinatra," His publicity shots that show his uncanny resemblance to the young Sinatra. Phil and his own trio recently supported Ken Dodd at the Frontier Club, Batley, Les Denis at the Princess Theatre in Blackpool and then as were the main act at the Civic Hall, Leeds before the Lord Mayor of Leeds.

Phil was filmed by Yorkshire TV and the next day he was featured in the Sun newspaper under the heading 'The New Frank'. Phil, accompanied by his trio and an ITV crew, flew to the United Arab Emirates to fulfil bookings in Dubai, Al Ain and Abu Dhabi. The resultant 30-minute documentary, entitled 'Just to be Frank' was broadcast. Phil experienced one of the personal highlights of his career so far when he had the privilege of a meeting with Mr. Frank Sinatra JuniorPhil is ideal for any special event or party and suits all ages with Sinatra’s timeless classics. He is also available for pure look-alike work, event openings, guest appearances, TV and photographic engagements. This is a fantastic tribute to the King Of Swing.

Prices are based on a solo performance but Phil can perform with a backing band at an additional cost.