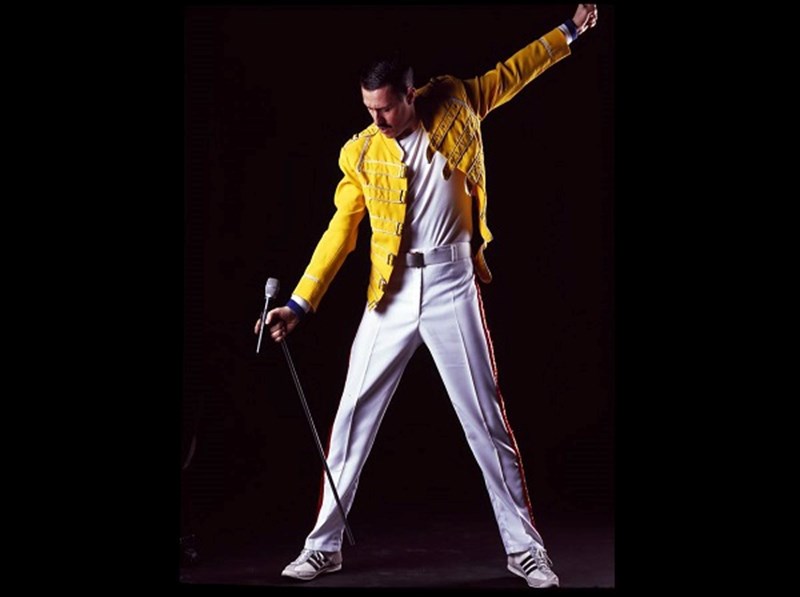 Dean Richardson as Freddie Mercury faithfully recreates the image, voice and flamboyancy of the great man himself. Audiences are always left amazed by the authenticity and intricate detail Dean puts into each and every performance.

Dean Richardson as Freddie Mercury faithfully recreates the image, voice and flamboyancy of the great man himself. Audiences are always left amazed by the authenticity and intricate detail Dean puts into each and every performance.

From the moment the music begins and the lights pulsate, Dean explodes onto to the stage and from then on, the energy and exuberance never stops flowing.  From the stunning vocals to the mannerisms, from the outlandish costumes to the moustache, it's all there to ensure that the audience have the very best experience.

Dean comes from from a musical family, his mother was a headline act in Cumbria during the club years, and her mother before her. With many musicians in the family it was inevitable that one day Dean would also play his part on stage.

He began playing the piano at the age of 7 and also attended the Yamaha School of Electronic Music. During his school years he would perform in local hotels in his hometown of Morecambe to residents, this experience would set him in perfect steed for his transfer to Blackpool's golden mile in later years.

Although talented both musically and vocally Dean originally pursued a 'proper career', and his studies lead him to attain a degree in Accounting and Finance. While studying Dean continued to dip his toes in the 'business' and sang whenever his studies allowed. He appeared at the Summerbreeze fesitval in front of 20,000 people and has supported many acts in his early career including 911, Alexander O'Neil, Leo Sayer, Tony Hadley, Edwin Starr, Rose Royce, Jackie Graham, The Pasedenas to name but a few. He also appeared on MTV's flagship programme 'MTV Select' hosted by Donna Air, after winning their national competition to find new talent.

After graduating Dean worked for a local newspaper group and it was there; after many auditions he was chosen out of over 6000 applicants to be one of five contestants to appear on BBC's Star for a Night hosted by Jane McDonald. This was aired on BBC1 on a Saturday night in their prime time slot in front of 12 million viewers attracting the attention of a host of talent agents including theatre impresario Bill Kenwright.

It was at this point Dean took the decision to follow his dream and jump in with both feet into showbusiness. Now based in Blackpool, Dean was much sought after on the circuit performing all across the coast and beyond. He has been the opening act on the North Pier's summer show, headlined a production at Blackpool's famous Opera House where the likes of Frank Sinatra, Judy Garland and other famous names have tread the boards. Entertained the crowds with Danny La Rue in Blackpools Tower Ballroom and even performed at the Blackpool Christmas Lights switch on.

After teaming up with an already successful Queen tribute band Dean perfected his art over the following months playing in various venues up and down the country. It was at this point the producer of Blackpool's longest running and most successful show – Legends, was to get in touch. Dean has since enjoyed very succesful consecutive summer seasons in it's principal role; firstly at the Central Pier and now at their new beautiful home – The Sands Venue.

In addition to Legends, Dean enjoys performing at a variety of locations and events here in the UK and also flys to hot spots across the Mediterranean and further. He is also a regular and extremely popular tribute act on P&O cruise liners taking him and his Queen tribute show all over the world.

Most recently Dean appeared on the celebrity version of 'Come Dine With Me', for their Queen's jubillee special and has performed at many prestigious events inluding Masapolomas Pride Festival in Gran Canaria on the main stage, that regularly attracts 80,000 people!!

Dean is available as a:-

"I would just like to say a huge thank you to you and Dean.... He was amazing, we would love for him to come back next year, everybody really enjoyed him." - Becci, Venue Armoury.

“What a fantastic night! Dean was brill and had us all singing and dancing, he is a top act.  Please let him know how we all enjoyed his act! Also thank you for your help in making our nights outstanding.” – Keith Purnell, Filton Golf Club.

"Everyone thought he was brilliant coud not have wished for anything better. GREAT ENTERTAINMENT!" - Josie Humphrey