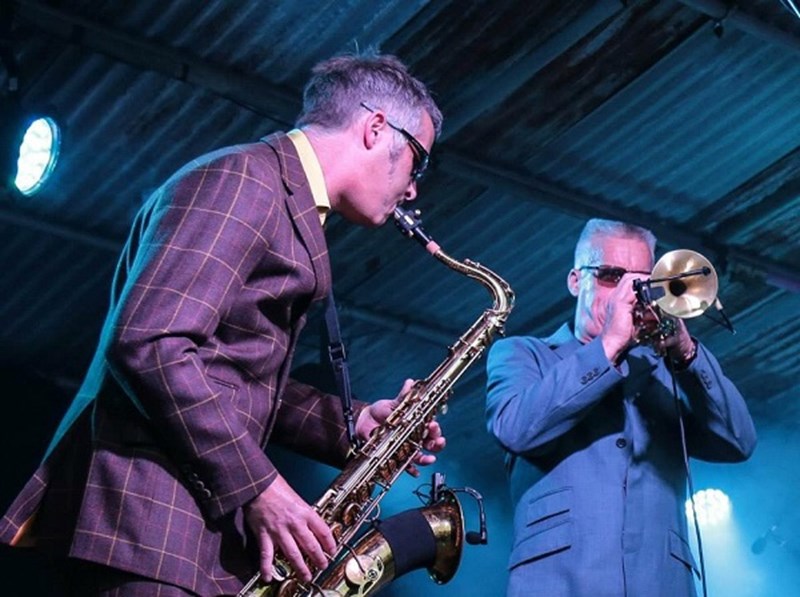 The Los Palmas 6 are an established 7-piece Madness tribute band; featuring Steve Turner who played sax with THE Madness for eight years!

The Los Palmas 6 was established in 1998 to offer the most accurate Madness Tribute.

Madness were prominent in the late 1970s and early 1980s and are still as relevant as they ever were, influencing many younger bands and still touring and recording themselves. Known for their catchy tunes and playful videos, Madness are also all great musicians, and this has been reflected in the line up of the Los Palmas 6 (aka LP6).

Initially LP6 consisted of 6 members (which is where their name came from – a twist on the Madness single, ‘The Return Of The Los Palmas 7′) and in 2006 they grew to the fully authentic 7 piece by adding their very own Chas Smash on vocals and trumpet. They play all the classic hits and some superb B-sides.

From the beginning the band has established a large following of fans, ensuring packed gigs wherever they play.

They are available fully self contained with a large professional PA and Lighting rig. They’ve worked hard to recreate the authentic sounds of Madness with an amazingly authentic stage show including backdrops, stage clothes etc.

Their Sax player Steve Turner also played sax with Madness for eight years! Lee Thompson and Woody from Madness have both played with the band making them the most accurate and authentic Madness Tribute Band on the circuit.

The other musicians in LP6 are also world class musicians with world tours and European festivals under their belt and have also played and recorded with other Ska and Punk giants such as Bad Manners, The UK SUBS, Peter and the Test Tube Babies.

LP6 play all the hits from the early days right up to today, including ‘Baggy Trousers, One Step Beyond, Nightboat to Cairo, Lovestruck and It Must Be Love’ etc. They play up to an hour and a half, injecting so much energy into their performance that you have no choice but to dance!

If you book LP6 for your event, you will book an night of fun, nostalgia, dancing and wonderful songs.

What people say about Madness Tribute Band - The Los Palmas 6

"They are amazing, brilliant, flexible and totally awesome!" - Anne Saunders.

"What a great bunch of guys they were. They went down very well with the crowd and the dance floor was packed all night, would highly recommend. Thanks for all your help." - Louise Cope, Bank of Wales.