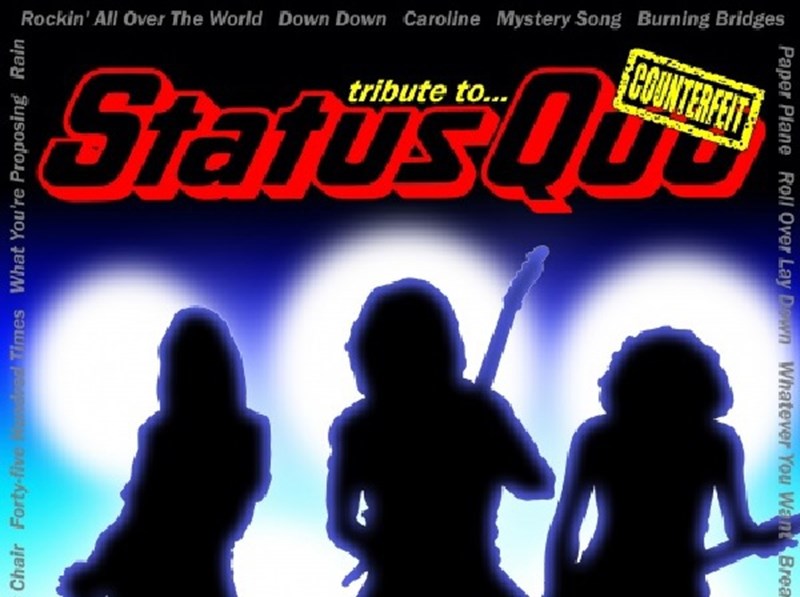 Formed by four hardened Status Quo fans, Counterfeit Quo have toured all over the U.K & Europe. The band have also had the honour of working with original Quo drummer John Coghlan and been given the seal of approval by Francis Rossi and Rick Parfitt!

An adrenaline charged set sees the band crash their way through Quo's best known hits including Caroline, Down Down, Whatever You Want and Rocking All Over The World whilst still paying tribute to glorious earlier albums like Ma Kelly's, Dog Of Two Head, Piledriver, Hello, 'Quo' etc.

Any temptation to 'lighten up' has been firmly resisted. What you get is heads down, no-nonsense boogie! Played on the familiar beaten up green and white Telecasters by the denim clad true likenesses of the original Quo members, with wall to wall Marshall amps, buckets of sweat and more hair than you can shake a stick at.

Originally named Piledriver, Counterfeit Quo formed in Essex in early 1995 by four hardened Quo fans who quickly set out to recreate the dynamic, energetic live Quo performances of old. The bands reputation spread quickly and they have now toured every nook and cranny of the UK, ventured into Europe and featured on local and national BBC Radio.

Over the past year the band have had the pleasure of working with original Quo drummer John Coghlan, either as part of his own band, John Coghlan's Quo, or with John appearing as a special guest on Counterfeit Quo gigs.

They have also been given the seal of approval from no less than Quo's very own Francis Rossi.

“I know that I phoned you after our party last Saturday, but we decided to put it in writing how pleased we were with the band’s performance at Uckfield Civic Centre.
Having seen ‘Status Quo’ at the Brighton Centre some years ago, we are able to do a comparison. Counterfeit Quo sounded just as good & all our guests commented on how good they were. We met the band before & after their performance and they were very pleasant to chat to. Please pass our thanks to the band & we will definitely book them again for our next party, which will be our ’Golden Wedding’ anniversary in 4 years time.” – Peter & Carolyn Trigwell

"The band were brilliant.  Very much enjoyed by all." - James May, Soldiers & Sailors Club.