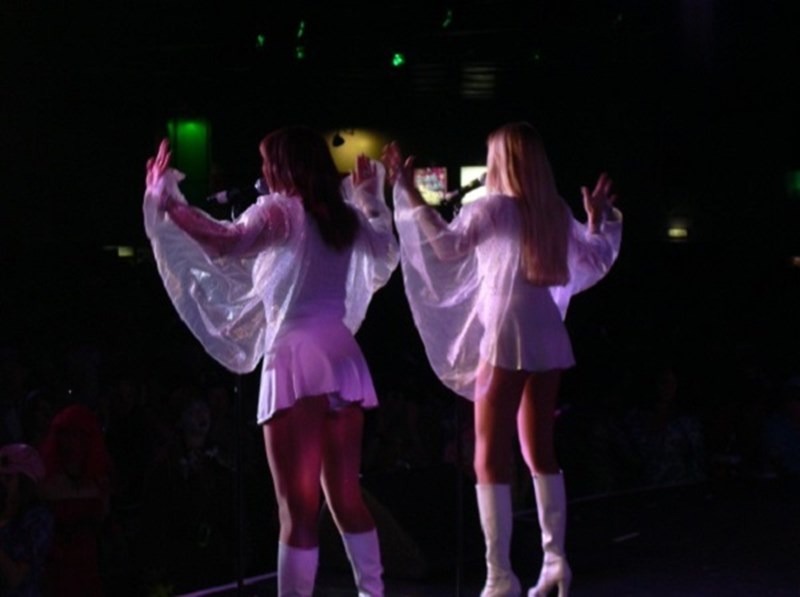 Angel Eyes are the girls from Planet Abba. Since their formation in 2002, Angel Eyes have succeeded in establishing themselves as the UK’s leading Abba tribute duo.

Angel Eyes are the girls from Planet Abba.

Since their formation in 2002, Angel Eyes have succeeded in establishing themselves as the UK’s leading Abba tribute duo. Their professionally choreographed stage show, with many costume changes, faithfully encapsulates the sights and sounds of Abba and their endless stream of unforgettable hits.

Gaining a renowned reputation, whilst fulfilling many of their regular bookings in hotels and casinos, returning time and again due to high demand, they also provided the entertainment at "The Highland Games", varied outdoor music events in central London and many high profile conferences.
Angel Eyes have worked alongside several named artistes, including The Four Tops, Slade, Mudd, Jimmy James and The Vagabonds, 911, Showaddywaddy, Alvin Stardust, The Real Thing and The Royal Philharmonic Orchestra.

As the girls of Planet Abba, the internationally acclaimed, highly sought after band they were requested by the BBC to appear in a documentary. They featured in BBC 2's "Pay Off Your Mortgage". Recently Planet Abba were the pre-match entertainment at Leeds Rhinos stadium, live on Sky TV. Last year they were also guests of honour, performing in front of thousands for a radio station in Bangalore, India.

Their professionalism and sheer enthusiasm both on and off stage, have secured them many re-bookings and has earned them a reputation beyond reproach. From football stadiums to casinos; from garden parties to palaces. Angel Eyes are the perfect choice for all occasions - themed nights, special functions, party nights or weddings, the list is endless.

Also available as a full Abba Tribute as 'Planet Abba'.

"A great choice for a wedding. Thoroughly enjoyed it. Brilliant" - David Tennant (Dr. Who).

"The best Abba tribute I have ever seen, you guys were fantastic!" - Derren Brown.

"In my line of business I come across many tribute bands and have indeed seen a number of Abba tributes, but I have to say Angel Eyes take some beating ! ! ! ! !" - Steve Wright.

"I Loved You I Loved You” - Sue Nicholls (Coronation Street)

“The evening was a huge success. The feedback we have had is all positive. All Abba fans obviously but they are surely the most discerning in this case and I haven't heard one negative comment. The marquee was bouncing!! Thank you for your help, I hope they all got back home ok and enjoyed their visit to pembroke.” - Elisabeth Gossage - Pembroke Music Festival

"Angel Eyes were brilliant, a great evening.  Young and old alike loved them would recommend them to anyone." - Roger Doucy, Joydens Wood Community Centre.

'Hi Richard. A superb evenings entertainment by the girls on Saturday, enjoyed by 100 members and friends at the golf club. Would certainly recommend to any one looking for an Abba Tribute with just the two girls'. - Ron Gibson, Chipping Sodbury Golf Club