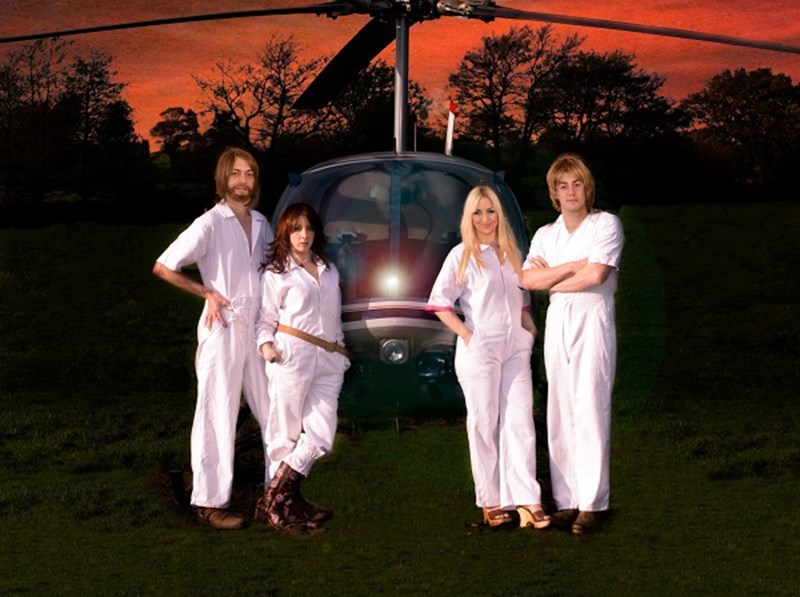 Quoted as The Next Best to the original Abba by Scandinavias leading music television channel NRK, this show has entertained audiences all over the world, from large outdoor festivals to private birthday parties. Wherever they perform they endeavour to get the audience on their feet and capture Abba as they were in there hayday...

"Few have received the same recognition as Forever, the nation's leading live Abba tribute"
The Scotsman, Scotland on Sunday

"Successful tribute bands have to not only the look and sound exactly right, but also recreate the atmosphere of an original concert. "It is easy to see why Abba Forever are regarded as one of the most authentic!” Gloucester Echo News

Tours of Iceland, Austria, France, Romania, Denmark, Portugal ,Cyprus, Norway and Northern and Southern Ireland have taken place, a tour in Russia included television interviews & their performance in Moscow was televised 'Live' and shown throughout the Baltic States.

A performance in Hossegor, France featured on MTV and a recent festival in South Africa had them performing in front of 55,000 people headlining with some of their biggest stars. More recently they were flown to the exotic location of Phuket in Thailand for several performances which generated lots of media coverage.

“To say that it succeeds in its aim is an understatement”. South Wales Evening Post.

A considerable landmark in their career was their sixth sell out theatre tour of Sweden, the ‘home of the original super group Abba’. They enjoyed standing ovations and an abundance of positive feedback from the audiences. Countless comments were attributed to Forever stating that they are “Just like the real Abba!” Making front page of the Swedish tabloids and television interviews, not to mention being followed by a Norwegian camera crew for a top music channel documentary on ‘Abba Forever’, on a programme called ‘The Next Best ‘to the original Abba, which was shown and Broadcast in Norway, Sweden and Denmark.

There are many tributes in circulation but Forever are exceptional in comparison. With the most meticulous attention to detail, this live production aims to reproduce Abba Live in Concert focusing on the live aspect with an exceptionally talented, professional cast. The show features the very high standard of musicianship needed to recreate Abba songs and with all performers singing & playing totally live, audiences are experiencing a true live performance. Packed full of excitement and vivacity, dazzling costumes and authentic lighting design, they will take you on a journey back to the 1970s. Wherever the band performs, audiences can watch and hear all of the hits including some hidden surprises for even the most ardent Abba fan.

With Varying line ups this show can be tailored to suit any event and budget comprising of a 4 piece live band made up of Piano & keys, Acoustic & Electric Guitars, Drums and Bass guitar with all musicians singing live. Fully choreographed and authentic, lavish costume changes.

Abba Forever are also available as a 5 or 6 piece band with added live drums or live drums and live bass guitar.

'Hi Richard!
Just to say Saturday night went so so well. Abba Forever were absolutely superb, the music and vocals were brilliant and much enjoyed by all. Please pass on to them our thanks for a fabulous evening. Many thanks'.
Alex Williams

'Hello Richard,
Everyone without exception said it was the best party they had attended in years; the performance was exceptional and all were dancing! Some of the guests asked for details and I told them to contact you, one is the chairman of Citibank! Thank you and the band for a prompt and professional service. Best wishes'.
Mo Cerrone