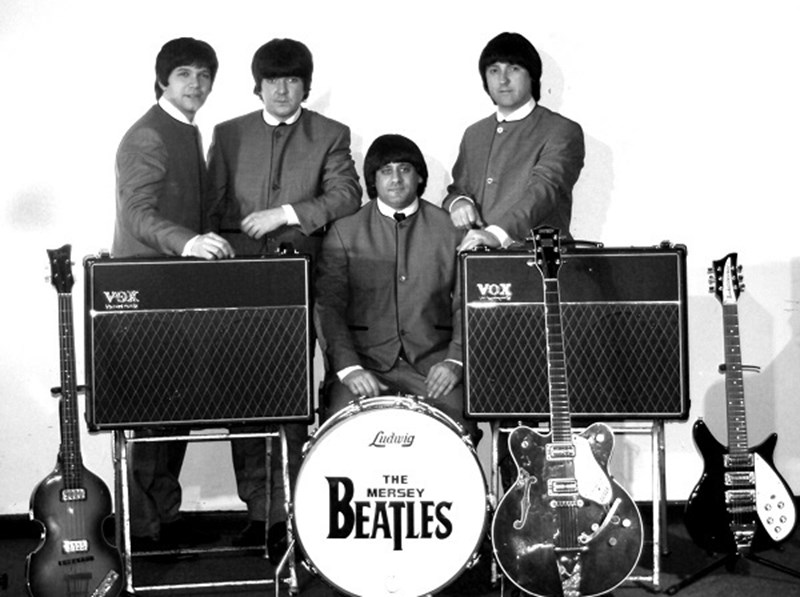 The Mersey Beatles formed in 1999, when school friends Steven Howard and Brian Ambrose got together with Steven's cousin David and fellow aspiring musician Jason Murray. Just like their musical role models, their early performances were around the social and cabaret clubs in their home city, including many venues where The Beatles performed.

The buzz they created in the early days soon caught the attention of Cavern City Tours, owners of the world famous Cavern Club and organisers of the annual International Beatles Week. The boys were given a Thursday night residency at The Cavern and have become the headline act at the Beatles Convention at Liverpool's Adelphi Hotel.

The Mersey Beatles are still honoured to be playing regular Thursday nights at The Cavern from 10pm and are well on their way to topping the 294 performances which The Beatles achieved at the club.

News of their success at The Cavern reached Liverpool City Council, who invited them to become the city's official tribute band. The boys have since represented their home town at various events, including the conferences of all three main political parties, investment initiatives and concerts across Europe to attract tourism to the 2008 European Capital of Culture.

Other trips abroad have included the inaugural Australian Beatles Festival in Adelaide and a headline set at the Hard Rock Cafe in Kuala Lumpur, Malaysia.

The band have headlined festivals in Mons, Belgium and Denmark's Faroe Islands, and topped the bill at outdoor events in Croatia, Norway, Italy and Germany. They also perform an annual headline set at the Swedish Beatles Festival in Vasteras.

2007 was a big year of anniversaries for Beatle fans - 50 years since John met Paul, 50 years since the Cavern club was launched, 40 years since Brian Epstein died, 40 years since Sgt Pepper was released. It has also been an eventful year for The Mersey Beatles, including some unique opportunities, such as the launch event for Royal Mail's Beatles stamps and a live set at Abbey Road studios.

The night before the official launch of Royal Mail's Beatles stamps, The Beatles Story Museum hosted a party to display the stamps for the world's press. The Mersey Beatles were honoured to play at the launch.

At the world-famous Cavern Club's 50th birthday celebration, The Mersey Beatles headlined an impressive bill of 32 bands in a show lasting 13 hours!

VisitBritain, the country's official tourism website, invited the boys to play at Abbey Road, the world's most famous recording studio. Veteran DJ David "Kid" Jensen hosted the night, and the live music took place in Studio 1. The Mersey Beatles closed the show with a 40 minute set of Beatles classics recorded just a few feet away in Studio 2 all those years ago. The highlight was having unlimited access to Studio 2 for the day, where they breathed the air, took photos, and even wrote a couple of songs when no one else was around.

The band also featured in a series of photos in various Liverpool locations as inspiration for paintings commissioned by Liverpool's new Hard Day’s Night Hotel.

The lads were delighted to play at celebrations to mark fifty years since John met Paul in July 1957, when John's skiffle group, The Quarrymen, played at the Village Fete near his family home in Woolton.

The original Quarrymen played a special concert to begin the Woolton Music Festival, and The Mersey Beatles rounded off the weekend's events.

This year the band has thrilled audiences in England and across Europe with rare performances of their critically acclaimed theatre show. They have been to Dublin, Cannes, Germany, Sweden and Norway, and performed on the QE2.

Joe Flannery, The Beatles’ booking manager
When they play in The Cavern, they perfectly recreate the atmosphere that the original Beatles produced. I could close my eyes and it would be like listening to The Beatles again.

Steve Panter (‘Stevie P’), Cavern Club Entertainments Manager
The Mersey Beatles do all the same kind of banter and crowd involvement, but it’s not rehearsed or fake, that’s just how they are. If The Beatles were still going today, they’d be exactly like The Mersey Beatles.

Philip Key, Liverpool Daily Post, July 2007
The Mersey Beatles are the Cavern's house band, recreating the excitement of the original group in an authentic setting. They do not pretend to be lookalikes but they do sound like the band. And rightly so. They are one of the few tribute bands made up entirely of Liverpudlians. Unlike many tribute bands, the line-up has remained constant and they even have a "fifth Beatle", Tony Cook, who in the show slinks on at the back of the stage to play keyboards. He supplies all that orchestral backing that played such a significant role in The Beatles recordings, and Cook works on the arrangements. Meeting the band backstage at The Cavern proved that, like the early Beatles, they are all likeable lads.

Standard Show: Recommended for your local club, family celebration or dinner dance. This quality show is 2 x 45 minute sets of Beatles hits with a costume change and the classic instruments of the early Beatles...

All You Need Show: This includes their standard show (above) AND their DJ and keyboard player Tony C. Having Tony along means the band can perform just about any Beatles song from any era and include their Sgt Pepper costumes in one of the sets. 2 x 45 mins sets and DJ service until midnight or 1am

Deluxe Show: Dance, sing along or just sit back and enjoy the sights and sounds of Beatlemania. Recommended for theatre, corporate events or if you just want something really special. A critically acclaimed 2 x 1 hour set spectacular. The live show The Beatles never gave- a showcase of their entire musical career in one breath-taking performance. All the early hits are here, PLUS the hits of the later years...