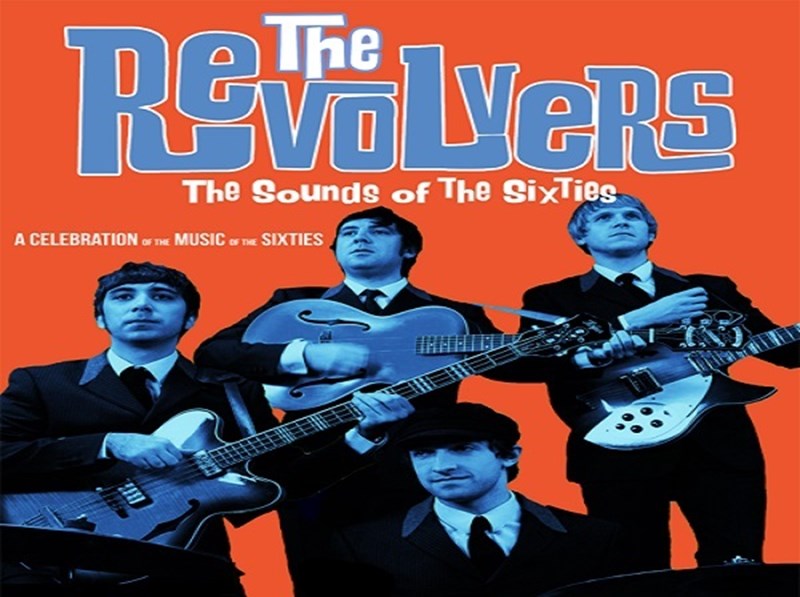 Suited and booted, The Revolvers are an energetic tribute to the lost decade of the 60s covering songs from artists such as Small Faces,The Kinks, The Beatles, The Who, Spencer Davis Group, The Rolling Stones and many more....

About Sounds Of The 60s - The Revolvers - 60s Tribute Band

Think back to an era when Rubber Soul and Revolver by The Beatles were high in the charts the Mini was the car to have – as was the skirt – and great music filled with guitars and harmonies could be heard from most radios.

Now come back to the present day – The Mini car has just celebrated its 50th birthday and is still going strong; The Beatles’ albums have just been re-released and The Revolvers are bringing the great music of the 60s back to life recreating the youthful look and the hits from your favourite 60s artist

Suited and booted, The Revolvers are an energetic tribute to the lost decade of the 60s. The Revolvers cover songs from artists such as Small Faces,The Kinks, The Beatles, The Who, Spencer Davis Group, The Rolling Stones and many more....

The Revolvers have performed at famous venues such as The Cavern, Liverpool, Hampton Court, London and have also toured parts of America and Europe. The Revolvers were also recently handpicked to perform at the Premiere after party for the worldwide Premiere of 'MADE IN DAGENHAM' in London's West-End!

This is a self contained act with full PA and light show, giving the audience an authentic and full 60s experience, from the clothes they wear to the instruments they use. Costume change is also available.

The Revolvers are entirely self-contained with their own high quality PA and offer a choice between 1 x 1hr 30, 2 x 45 hour and 3 x 30 minute sets. They can also provide recorded music for dancing in any intervals, and wherever possible, will try to work up a first dance or special song for your event. Sets can be tailored to clients individual requirements.

'Absolutely brilliant band.... took me back to my days in the cavern'  Ray Ennis, Swinging Blue Jeans

The Revolvers offer:- 1 x 1hr 30 mins 2 x 45 mins 3 x 30 mins - Sets can be tailored for individual requirements of the client - All background music is provided - Full disco is an optional extra

FOR THE FULL 60'S EXPERIENCE WHY NOT CONSIDER THEIR SUPER 'MEET THE BEATLES TRIBUTE SHOW'.

“The lads were absolutely brilliant, thank you.  They were polite and enthusiastic and the dance floor was always full.  Please pass on our appreciation.” – Hilary Wilmshurt, Captain, Chobham Golf Club

“Sounds of the 60s were a great success at our Ball in the Spa Hotel on 9th December 2017.  The lads were very pleasant to speak to and exceptionally good at entertaining our 100 plus guests.  The music was very good too, as a 20 year old in the 60s I felt they did a great job in impersonating the groups of that era.” – Vince Kane, Treasurer, Middle of the Road

"The boys were fantastic. One of the best bands we have had!!!" - Dane Gillam, Home and Eat