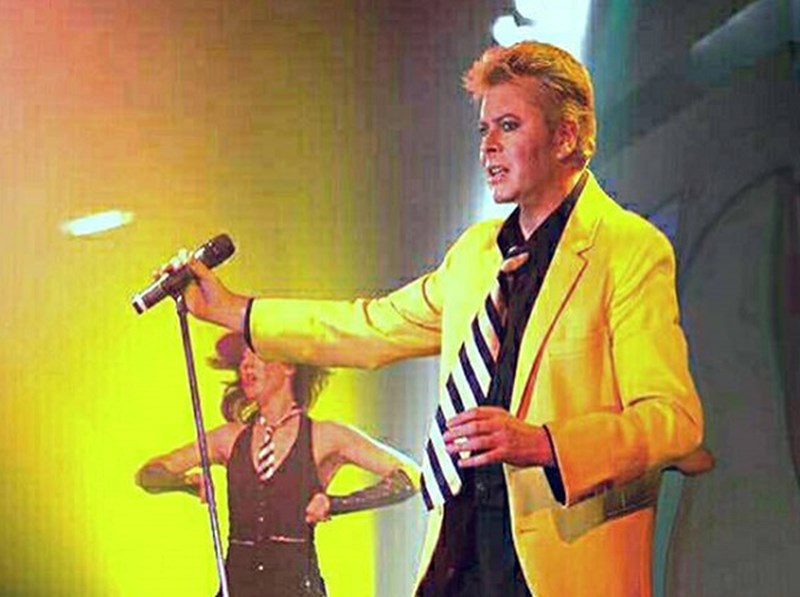 Jean Genie perform an incredible tribute to David Bowie, complete with dazzling, flamboyant costumes and stunning effects. Critically acclaimed as the UK’s top Bowie tribute, you’d be forgiven for thinking you are seeing the man himself.

Jean Genie was created by John Mainwaring & John ford in 1993. An original recording artist in his own right, John Mainwaring has been signed by numerous record companies twice with Warner bros. In the 1980s, David Bowie’s world famous producer Tony Visconti produced some of john’s songs when john was signed to WEA.

John has worked with many household names such as Jarvis Cocker singing and starring in pulps bad cover version video and single. More recently John co wrote and recorded all the music for Beverly Callards work out fitness DVD entitled lasting results - better known as Liz McDonald out of Coronation Street(!) As well as performing as David Bowie in Jean Genie John is currently signed to Bucks Music publishers in London. His achievements have been writing 3 songs for Tony Christies million selling album the definitive collection, plus numerous theme tunes for BBC Radio.

In the late 1990s John was approached by David Bowie’s famous band the Spiders from Mars and was asked by them if he’d front the band and tour with them. Obviously John accepted the offer and John remains to this day to be one of only a few tribute artists to tour and perform with an original artist’s band. John also played harmonica and sang backing vocals with Def Leopards Joe Elliott on the spiders from mars cybaunauts album.

John owes a lot of his experience of working in theatres and opera houses to Mike Southon aka Mike Fab Gere.
They both met on the Big Breakfast TV show in the early 90s and later teamed up together when Mike asked if John would tour in Mikes very own rock musical called Freak Out. More recently they found themselves performing again on stage in Moscow Russia.

John has undertaken many press/radio interviews touring extensively around the world playing the part of David Bowie. These days John prides himself on the quality of his voice, mannerisms and overall style to the late great David Bowie, many of John’s latest performances have been with Trevor chances highly successful show 'Legends' in Blackpool.