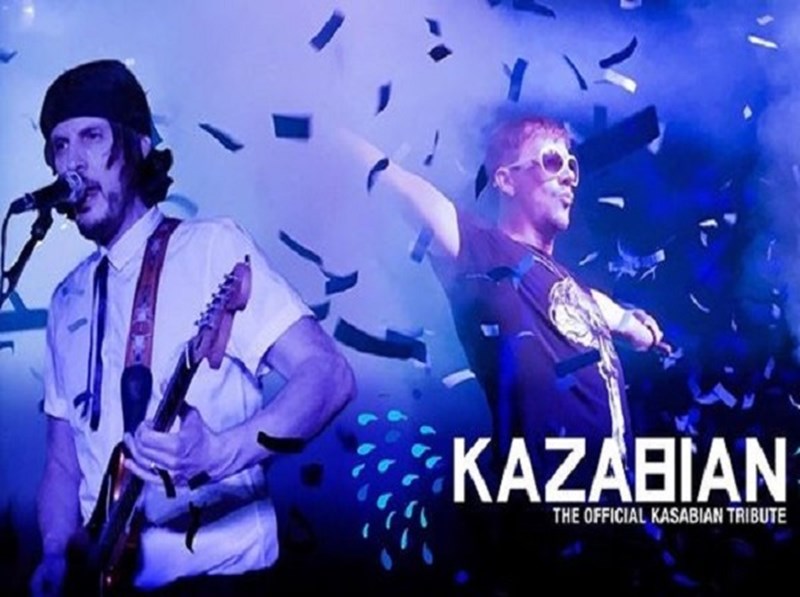 Kazabian are the worlds first and finest tribute to Kasabian. Kazabian spent 6 months of intensive rehearsing to ensure that the live show is as close to the real thing as it can get...

Kazabian are the Worlds first and only (as far as we know) Tribute to the UK's Number One Band, the mighty "KASABIAN". The band members have played in various original bands over the years and saw an opportunity and a definite gap in the market for a Kasabian Tribute. So far, nobody else has attempted one. Hot surprising given the difficulty level being so high. It has to be said Kazabian have certainly set the bar extremely high, not only sounding exactly like them but also looking like Kasabian.

With the boys all being huge Kasabian fans, they spent months of intensive rehearsing to ensure that the live show is as close to the real thing as it can get. The rise and hype about Kazabian has been massive since they exploded onto the Tribute scene back in March 2010. They have played a host of Clubs, Festivals and Universities already, and supported the likes of The Noisettes at Oxford Uni, Olly Murs at Leicester Uni and The Holloways at BugJam Festival 2010. They have also recently headlined their 1st Tribute Festival in Maryport. August 2010 - Along with their 1st venture to Northern Ireland, Kazabian appeared at the biggest tribute festival in Europe, TribFest and also performed at the Matthew Street Festival to a 30,000 strong crowd in Liverpool.

Kazabian have also recently been mentioned by Tom Meighan (Kasabians Front Man) in the July 2010 issue of Q Magazine, he complained that Kazabian had more gigs than the actual band!

The future looks bright for the band, who play all the singles and more from the 3 studio albums - Kasabian, Empire and West Ryder Pauper Lunatic Asylum - a 4th album is on the way which the lads will get straight onto. Tracks covered include massive hits such as - ClubFoot, Underdog, Shoot The Runner, LSF, Empire, Where Did All The Love Go, Vlad The Impaler and Fire.

Kazabian are available to hire for any type of event in the UK, a sound engineer with PA/Lighting can be provided to suit any venue.

"Kazabian rocked the house...one of the best contemporary tribute acts I've booked and an absolute pleasure to work with too" - Karen Thompson, The Wave Centre, Maryport, Cumbria

"Only a handful of tribute bands in the UK can actually claim to be just like the real thing, Kazabian are one of them" - James Beck, KU Bar, Stockton On Tees

"What a band! By far the best booking SRL Promotions ever made! More than a tribute. Thanks Kazabian!" - Dan Armstrong, SRL Promotions, Bridgewater, Somerset